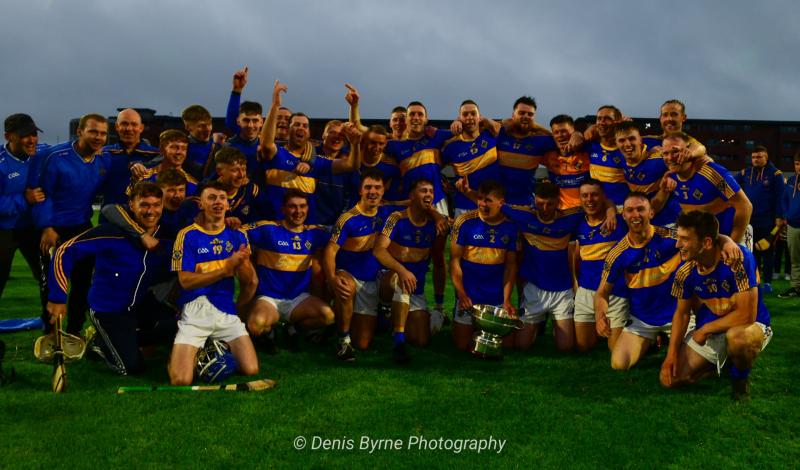 Six years is not a long time, but in a hurling stronghold like Clough Ballacolla, where children almost enter the world with a hurl in their hands, six years is a famine, starved of a county championship. They were fed last night, and what a feast it was. They were the better side for the majority of the game, and for their captain Stephen ‘Picky’ Maher, it was a bittersweet pill to swallow.

Plagues with injuries this year, he missed championship games against Antrim and Waterford and he also missed the Division 1 Hurling League relegation play off against Westmeath which they won. ‘Picky’ returned tonight and put in a titanic performance. Started at corner forward, he played a star role in Clough Ballacolla’s win, chipping in with 13 points as his side powered to victory.

Speaking after the game, Maher was over the moon with the victory,

“It was a fabulous, just unbelievable. It was a really tough battle, but it was always going to be against a great Borris in Ossory Kilcotton team, but it’s just an unbelievable feeling to captain your club to a Senior County Final.

"It’s been tough, a tough last few months with injuries. Coming up to the last county final last year when it was meant to be played the first time, I was having a great run of it, with no injuries at all. This year I have had a couple, especially in the last couple of months. Thankfully, the shoulder held up okay today. We had a lot of injuries coming into the game today with Lee (Cleere), Brian (Corby) and Diarmaid (Conway) but everyone got through it like thank God”.

For fixture committees all across the country, it has proved a headache trying to organise outstanding 2020 games. It has equally been as tough for players involved in these fixtures, trying to keep motivation levels and fitness levels in-tact. Maher admitted after the game that it was difficult with all the uncertainty over the game itself,

“It was difficult enough now to be honest. It’s hard with injuries and then you don’t know whether the final is going to be played or not. You are kind of waiting around and that and then there’s lads that are saying it won’t feel the same if you win it but I suppose it’s just about keeping your head screwed on and keeping the lads motivated, and just keeping them going because there’s a big prize at the end of the tunnel and thankfully we won it today”.

Clough Ballacolla were in control for the majority of the game, but a late PJ Scully goal did throw a spanner in the works and it looked as if it had handed Borris Kilcotton a lifeline, but Clough Ballacolla weathered the storm and Maher admitted he had his ‘heart in is mouth for a few minutes’,

“There was huge doubt there for a few minutes. When PJ stood over the penalty, I was just hoping Cathal would save it but the penalty was unbelievable, right into the top corner. PJ is nerveless like, he is unbelievable. I think we won a free then which just kind of broke their momentum a small bit and kept us ahead, but yeah my heart was definitely in my mouth there for a bit I won’t lie”.

With the 2021 Championship due to kick off in two weeks’ time, Maher is already looking forward to it,

“I think the win tonight sets us up well for that (the first round). We are definitely coming in off a high, but we have The Harps in the first round in two weeks’ time. They’ll be coming in off a high as well after winning last night so they will want to show us that they deserve to be in the Senior Championship, so we certainly won’t be taking them for granted but we are going to enjoy this win for now”.