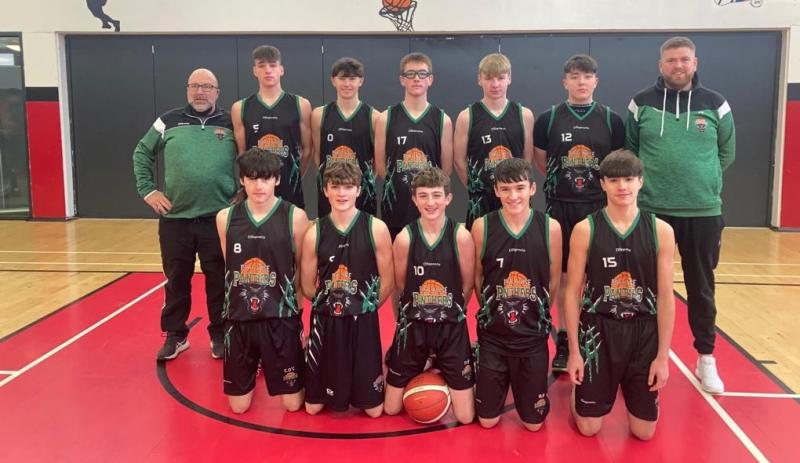 The Panthers lads got the better start with the first couple of baskets from Cillian O Connell and Cormac Hudson. As the quarter went on Panthers coach Jack Scully could not have asked for a more dominating performance with every opportunity being taken by his team to open up 15 point lead.

Baskets came from Tony Walsh and Fionn Stack. The home team got caught with the pace of the game and despite some good performances they were unable to finish with baskets. Portlaoise on the other hand kept the scoreboard ticking over with Cillian O Connell and Aaron Keane getting some fine baskets to extended their lead to 20 points.

The second quarter saw the home team determined to put in a better performance and were rewarded with the first couple of scores. Portlaoise settled into the game again with good ball movement resulting in baskets from David Harrington and Patrick O Callaghan. Limerick Lakers were unable to breakdown the tough defensive while Portlaoise on the other hand keep the scoreboard ticking over with fine shooting from Riley Comerford and Oisin Crossan.

The home team were eventually rewarded for their hard work as they went on to get the next few baskets with some fine shooting. As the half-time whistle approached the Panthers boys maintained their lead with great baskets from Fionn Stack and David Harrington.

The second half continued into a good running game with both teams playing well, exchanging baskets, Cillian O Connell and Tony Walsh finished off some good moves with baskets. As the game went on the Limerick lads were unable to breakdown the strong defensive while Portlaoise continued to dominate the game with Fionn Stack putting in an outstanding performance that would eventually see him top scorer of the game with an excellent 14 points.

The last quarter saw both teams relax with the final outcome in little doubt. The Panthers lads continue to play well with Riley Comerford and Oisin Crossan putting in good performances on the defensive end while at the other end they kept the scoreboard ticking over with baskets from Cormac Hudson and David Harrington.

Limerick Lakers to their credit never gave up battling for every ball and got a couple of good scores but in truth they never really looked like they could bridge the gap. Portlaoise finished the game strong with scores coming from Patrick O Callaghan and Aaron Keane to help their team go on to a well deserved win with an excellent team performance that see them through to the Cup Final.