THE U18 TEAM CLAIMED VICTORY DESPITE ONLY HAVING FIVE PLAYERS 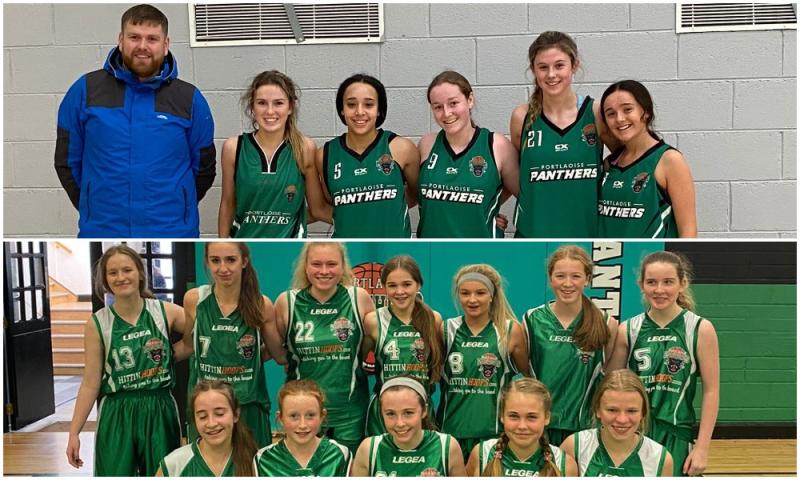 The Portlaoise U18 Girls basketball team travelling to Lorreto College Kilkenny last weekend to play local club Kilkenny Stars in the Midlands Area League Competition. They travelled with only five players due to other sporting commitments. Coach Jack Scully knew that they were going to be under pressure to get a result particularly as they had lost to the same team a couple of weeks ago by nine points.

The Panthers team started the better working the ball in offence getting fine scores from Neassa Towey inside and via excellent drives from the lively Rachel Byrne who was leading the attack. The Panthers girls continued to work hard on the defensive end with a strong zone that the Kilkenny team were not able to cope with and in particular some great stops from Faith Umeh.

As the quarter came to a close Portlaoise got a couple of good scores to take the lead, first from Ruth O Brien and then a couple of baskets in a row for Rachel Byrne who was out on the fast break at every opportunity.

The second quarter saw Kilkenny come into the game to get the first couple of baskets and then their was a scrappy period where neither team were able to score. Eventually the Portlaoise team were rewarded for their hard work with baskets from Ruth O Brien and Neassa Towey. They continued to play well keeping the scoreboard ticking over with good work from Ella Mc Nulty that resulted with baskets from Rachel Byrne to see the teams level at 25 point each at the halftime whistle.

The second half turned into a good running game with both teams playing well, exchanging baskets, Portlaoise got scores from Ruth O Brien and Faith Umeh. As the quarter went on they upped the tempo with strong defensive that caught the home club off guard as the ball was turned over on a number of occasions to get good baskets from Ella Mc Nulty.

In the next few minutes it was basket for basket. Portlaoise then for the first time began to dominate the game to open up a 10 point gap with ball movement that was creating problems and they were punishing their opponents with clinical finishing around the basket from Neassa Towey and Ruth O Brien to extend their lead to 14 points. The last quarter saw Kilkenny come back strong into the game with fine shooting to get the first couple of scores.

Panthers did not panic trusting their own game and were rewarded with good baskets from Faith Umeh and from Rachel Byrne who was eventually top scorer of the game with an excellent 25 points. Kilkenny to their credit never gave up battling for every ball going on a full court press to try to reduce the gap but the Portlaoise girls showed great composure to slow the game to run down the clock and control the final minutes with their last score coming from Ruth O Brien as they went on to a well earned 14 point win.

First half dominance sets up win for Panthers

Baltinglass started the better in the early stages and were rewarded with a couple of good baskets. The Panthers girls were slow to get on the scoreboard despite good performances from Faye Brown and Cara Coleman. As the quarter went on both teams were playing well, exchanging baskets, Aishling Lawlor finished with baskets after good work from her teammates Ella Beere and Emily O Driscoll.

The Panthers Girls continued to work hard on the defensive end with a strong zone that the Baltinglass team were not able to cope with and in particular some great stops from Sophie Mc Cabe and Sarah Corrigan. As the quarter came to a close Baltinglass did get a couple of opportunities to keep the scoreboard ticking over and held a three point lead.

The second quarter saw the Panthers girls continue to work hard on the defensive and then moved the ball quickly up the floor and were rewarded with scores from Chloe Byrne and Ella Beere. Both teams were now playing well, Aishling Lawlor was next to put points on the scoreboard for Portlaoise after some very good movement of the ball by her teammates Emily O Driscoll and Sarah Corrigan.

Baltinglass on the other hand while playing well were not able to break down the strong floating zone defensive and were forced to take the low percentage shots that were gathered up by Vakare Simkus and Roisin Murphy. As the half time whistle approached Portlaoise were in full control of the game finishing strong with baskets from Ella Beere and Faye Browne who put 10 points on the scoreboard in this quarter along to help her team to a comfortable 17 point lead at the halftime break.

The second half saw the Panthers club up the tempo again with good movement of the ball resulting in baskets from Sarah Corrigan and Aishling Lawlor. They were now in full flow as they grew in confidence with baskets from Sophie Mc Cabe.

Baltinglass to their credit never gave up battling and did get a couple of baskets to keep them in the game but once they missed a shot they never got any second opportunities as Emily O Driscoll and Roisin Murphy completely dominated to pull down all defensive rebounds. Portlaoise extended their lead with scores coming from Aishling Lawlor who was eventually top scorer of the game with an excellent 12 points.

The last quarter saw both teams relax with the final outcome of the game in no doubt, both teams were playing well, Vakare Simkus and Ailbhe Carroll got scores for the Panthers team. The Wicklow girls continued to battle hard and were rewarded with good baskets but never really looked like they could put a run together to bridge the gap as the home team controlled the ball. Portlaoise finish the game strong with the last couple of scores coming from Roisin Murphy and Chloe Byrne to help their team go on to a well deserved win.