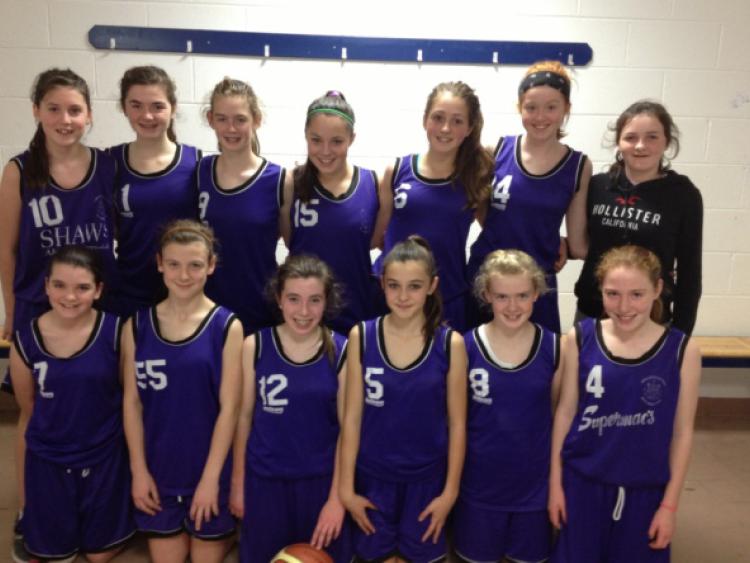 Panthers U-14 girls travelled to Athlone on Saturday to play their opening round of matches in the midland league.

Panthers U-14 girls travelled to Athlone on Saturday to play their opening round of matches in the midland league.

The girls faced tough opposition in their first game against a strong and determined Clonaslee side and the girls knew they would have to be at their very best to get a win.

Portlaoise were the faster team out of the blocks. Maeve Phelan and Eimear Healy linked up well to push their team into a comfortable lead at the end of the first quarter. Clonaslee didn’t drop their heads for a moment and came out fighting in the second quarter and quickly closed the gap to within four points.

Portlaoise’s Amy Byrne and Ailbhe Griffith continued to work hard defensively but Clonaslee ran the floor well and gave Portlaoise a lot of problems. At the half Clonaslee were ahead 22 points to 17 points.

Portlaoise’s Maeve Phelan continued to cause some problems for Clonaslee when she took it to the board time and time again. Roisin Quigley and Ellen Connolly worked tirelessly in defense and this gave Portlaoise a seven point lead heading into the final quarter.

Clonaslee were not done yet and fought back with some well worked scores and were only down by a basket with a minute on the clock. Try as Portlaoise could they could not close out the game and as the final buzzer went the teams were tied 41 points all.

Three extra minutes were added to the clock and both sides had to dig deep again. Maeve Phelan who had worked tirelessly all game pushed herself to the limit driving to the board and with Clonaslee in foul trouble placed her on the foul line. She dispatched seven out eight free throws to add to an impressive tally of 40 for the game and pushed Portlaoise over the line in a highly entertaining match. A great exhibition of basketball by both sides was on show.

The second game saw Portlaoise take on Tullamore Flames. After the energy sapping first game the girls had to lift themselves again if they wanted to make it two wins from two.

Both teams traded baskets for a first seven minutes with no one head for long. Aoife Fitzpatrick worked the ball well around the court in offence allowing Maeve Phelan to add some scores to the board.

A fresh five started the second quarter and they picked up where the others had left off. Maria Carroll and Shona McKittrick stepped up and worked diligently in defense to limit Tullamores scoring opportunity. However at the half they trailed by thrww points.

The second half of the game continued in the same manner with Beth Carroll and Eimear Healy staying strong under the boards. Maeve Phelan linked well with Ciara Byrne to add to the teams tally and with last quarter to play Portlaoise lead by seven points. The last quarter saw the ever dependable Maeve Phelan add to her teams tally taking some great scoring opportunities to allow the girls take the victory with a great team performance.

Portlaosie U-12 girls traveled to Portarlington this weekend for their first rounds in the midland league. They were up first against Tullamore Flames.

The girls appeared nervous at first but it quickly faded as Shauna Dooley opened open the scoring for Portlaoise. Shauna Dooley had a great day today and dominated this game. With help from her team mates she notched up a personally tally of 17 points.

Rachel Glynn and Sarah Flemming worked hard on defensive and offensive rebounds. It paid off as both girls landed themselves on the free throw line adding to the score. In the second quarter Portlaoise worked just as hard. Ella Byrne and Jessie Preston defended strongly throughtout the game. Ciara Byrne continued to keep Portlaoise ahead with easy baskets under the boards. Grainne O’Reilly and Rebecca Reddin worked extremely hard and played great defence.

The girls continued to fight in the second half. Again Shauna Dooley was rewarded for her intensity with great baskets from the fast break assisted by Eleanor Healy and Sinead Brady. Caoimhe Sweeney was a huge threat on defense and this paid off as she landed herself on the free throw line and getting a basket for her team. Final Score 34-16 Portlaoise.

The second game of the day against Clonaslee an it ended with the same result. Shauna Dooley opened up the scoring. Sarah Flemming played exceptional defense while inside Ellen Garvey continued to be a major threat and very little got past her. Rebecca Reddin and Rachel Glynn worked well together and assisted in great baskets by Ciara Byrne in the second quarter. Half time score was 16-4 to Portlaoise

In the second half of the game Sinead Brady worked very hard along with Grainne O’Reilly while Ella Byrne made great improvement in this game. She had some great steals which helped her team add to the baskets. Eleanor Healy and Caoimhe Sweeney worked very well under the boards. Rachel Glynn finished off the scoring for Portlaoise with a final score of 25-12 to Portlaoise.