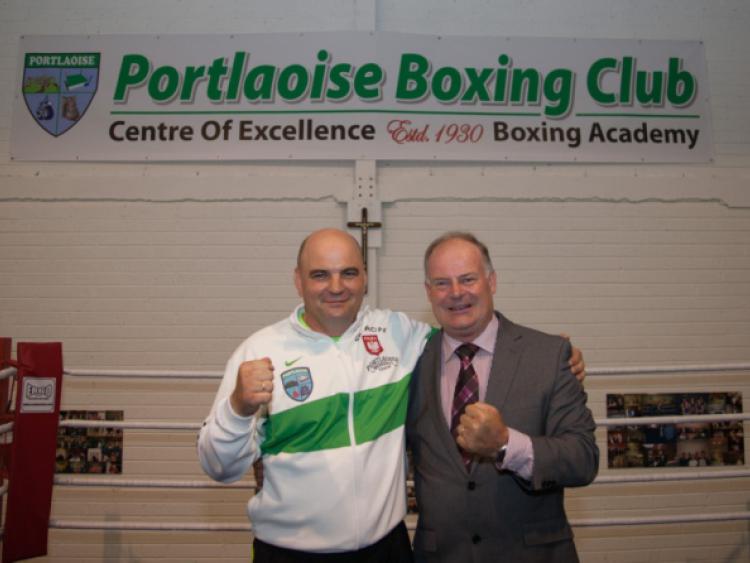 The premises is the first Boxing Academy and Centre of Excellence in the country, and sees the club set to carry on their success well into the future.

The opening last Tuesday night was as much a testament to the club’s reputation as their ambition, with former Olympians, politicians and boxing officials all turning out to inspect the impressive setup.

And impressive it is. Having made their home before this in a 27X40 foot room attached to St Mary’s Hall, they now have two full-size rings, toilets, offices, a kitchen, and enough room to house 250 patrons for the tournaments they intend to hold in the future. To label the new premises a simple step forward would be unfair, it is a huge, bounding leap.

It is, quite literally, a dream come true for Pat Ryan, so involved in the club that he is synonymous with the sport in the town. “It has been my vision for the last 20 years to have a centre of excellence here in Portlaoise” admitted Ryan after the opening last week.

After a two year battle, trying to earn support and come up with the money to purchse the facility outright, his vision is now a reality. He and the club have what they always wanted, and it will allow them to improve even more. “We want to implement the structure of the high performance setup in the centre of excellence.

“If we do we can produce more champions and we can increase our membership. Not everyone will be a champion, but it’s about giving everyone every opportunity.”

For those that do want to take themselves to the highest level, there is everything they could ask for right here. Along with the two rings, there are nine punching bags of different shapes and sizes, weights, medicine balls, mirrors, pads, gloves and all the enthusiasm the vast building can hold.

While it is a building for the future, the walls scream history, offering inspiration for the next generation.

Photos of men like Johnny Fox, born in 1898, show how far back the history of the club has been charted, and there is room for plenty of others, with Billy Blackwell, Pat and Paschal Reddin, Eugene LaCumber and Edward Healy just some of the faces peering out over the floor.

It won’t be just local youngsters benefitting from the facilities either, with IABA CEO Fergal Carruth, brother of Olympic champion Michael, hugely impressed by what’s on offer. “This facility is the first of its kind in the 32 counties” explains Pat Ryan. “Fergal was taken aback when he came in here, it is an ideal venue for training camps and international competitions, and everything has a ripple effect.”

Portlaoise has always had international appeal, with professional boxers like Rickie Burns (a former world champion) and Carl Frampton having visited the club for training camps in the past. Now, however, there will be more top level athletes coming to visit.

International tournaments are also in the pipeline, as Ryan revealed. “We are going to have a major tournament here at the end of October, where we will have a Polish team coming over to face an Irish selection.” Local boxers like Michael O’Reilly and Michael Nevin are expected to be involved.

All of that is to come for the club, but it’s worth noting the work that has gone into getting them where they are now. It was roughly two years ago that the process started, when the premises in Kea Lew came on the radar.

Naturally, it wasn’t easy to get the project over the line. There was financing and political boxes to tick. On that end, Ryan paid tribute to county manager Peter Carey for supporting what the club were trying to do. “Peter Carey is a man of vision, he could see what the club could manage to do for this town and the wider community.”

With the backing of Carey, the Town Council and Monsignor John Byrne, a long-time supporters of the club, they were close. Paying for it was another matter, and again there was a lot of people coming together for the greater good.

A bursary was secured from IPB Insurnace which helped to alleviate some of the burden. There was also contributions from the council, NAMA and private individuals, so the academy is the fruit of so many labours.

Even An Garda Síochána helped out, in keeping with their long support of the club. One of Portlaoise BC’s first homes was behind the current Garda Station, not more than a stone’s throw from where the Kea Lew premises is.

Their work could see the current membership of somewhere between 50 and 50 boxers treble or even quadruple in the future. It will provide an outlet for countless youngsters and Ryan admits that the club discriminates against no one. “We don’t have travellers, Polish, Latvians or anything like that in the club, we have members.

“Parents are going to have to sign up to that as well, and make sure he or she is doing what they are supposed to be doing with regard to their behaviour and manners in and out of the club, and that they are not doing anything that would be prejudicial to the club, and we expect that when they come in the door, they will go out a better person.”

It is probably worth noting too that it won’t be just boxers from near and far who will be welcomed to the club, as they intend to make the facilities and expertise available to countless others. Nine football teams have benefitted form Portlaoise boxing club in the past, and they hope to have the likes of Irish Dancing and Ballet on site as well.

It is an exciting time for Portlaoise boxing club, thanks not just to the politicians and financial backers, but also thanks to men like Pat Reddin and every other committee member, coach, family member and sponsor that has helped out in their 84 year history. It has made the future very bright indeed.