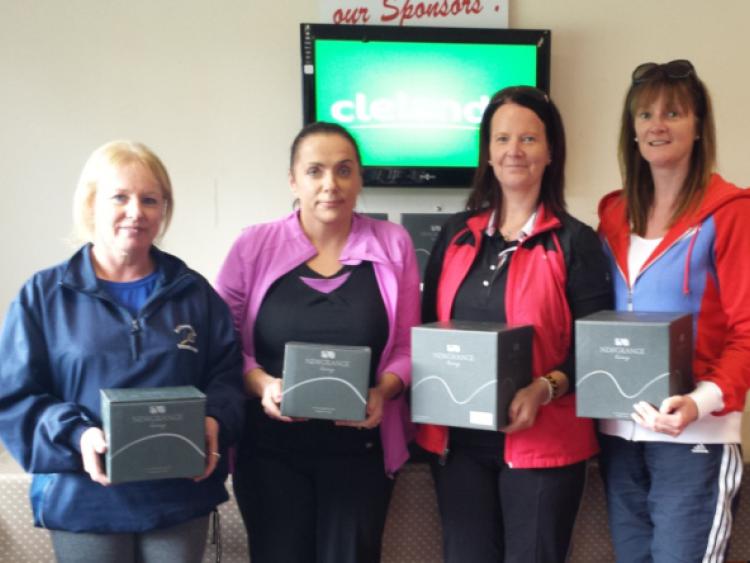 Abbeyleix Tennis Club welcomed over 70 players from various clubs around the midlands to the Open Week which took place from September 27 to October 4.

Abbeyleix Tennis Club welcomed over 70 players from various clubs around the midlands to the Open Week which took place from September 27 to October 4.

The event was kindly sponsored by Clelands Supermarket, Abbeyleix and the club thank them for their continued support.

The event saw players from Rathangan, Portarlington, Carlow, Kilkenny, Nenagh and more battle it out in seven different doubles sections during the course of the week.

In the A Mens Doubles, David Brophy and Gerry Grealish got the better of the Nenagh pairing Gary White and Brian McGahey to win out their section.

In the A Ladies, Leisa Fitzgerald and Claire Bergin narrowly beat Mary Daly and Claire Igoe in a close 3rd set tie-break.

In the A Mixed Doubles, Claire Igoe and David Brophy came back from a set down to take title from Leisa Fitzgerald and Ray Self in the third set.

The B Mens Doubles saw the Kilkenny duo of Pat Brett and Tom Madigan see off the Abbeyleix pairing of Michael Kirkman and Brendan Crawford to win out the section.

Lena Barker and Gillian Grant claimed the B Ladies title after they got the better of Catherine Hackett and Mary McCrann of Rathangan.

The Abbeyleix pairing of Siobhan Kirk and Tim Mounsey defeated John Goff and Mary McCrann of Rathangan to claim the B Mixed title and in the C Ladies Doubles section, Breda O’Connell and Ber Ryan got the better of Maura O’ Loughlin and Michelle Byrne.

Overall, some great competitive tennis was enjoyed by all and the event ran very smoothly.

Gerry Grealish spoke on behalf of the club and thanked all involved especially the competition committee and all who helped in the catering throughout the event.

The next competition is the club mixed doubles which will run over October and November. Should you wish to enter, please contact the club phone on 086-6684049 or via facebook.