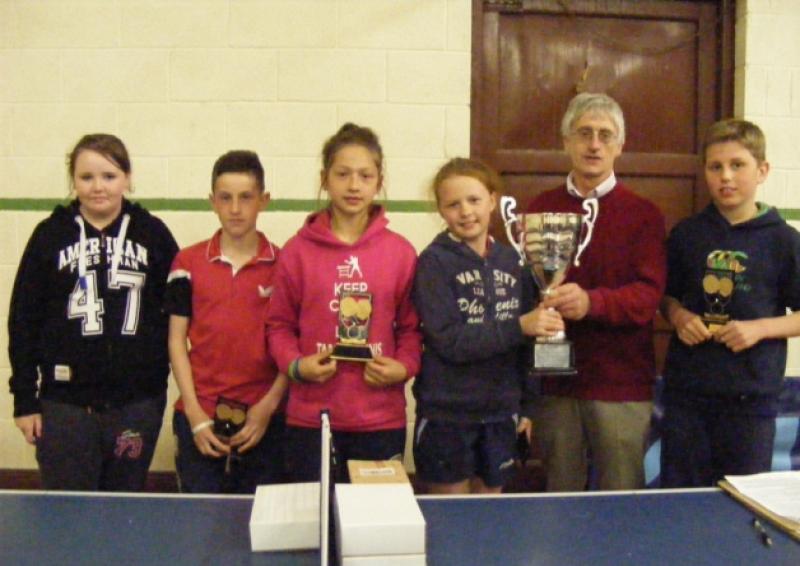 This being a high-cost event on players where support is vital, Eddie Phelan of Phelans Restaurant in Mountrath stepped forward to sponsor Tiegan for her dream event to represent Ireland.

The annual National Inter-Provincials event also took place in Cork recently where many local players were part of a winning Leinster team who captured gold just ahead of Ulster, Munster and Connaught.

Division 2 went right down to the wire with Ballyroan TTC and Rathdowney TTC playing out a 5-5 draw in which some fine performances were witnessed. A winner was decided on countback with sets won and here again it was down to the tightest of margins with Ballyroan just edging it 21-20. The Ballyroan team was made up of James Fitzgerald, Michael Fitzgerald, Jack Carroll and Fionnan Mahoney. The Rathdowney team was Andrew Neill, Eoin Flanagan, Conor Handcock and Ryan Fitzgerald.

Division 1 was also a nail biting finish with Mountrath TTC and Killermogh (Durrow) playing out a 5-5 draw. Killermogh were short of their number one player on the night. Again countback on sets came to the deciding factor where Mountrath shaved it by the narrowest of margins to take the title. The Mountrath team was Ross Handcock, Colin Conroy, Tiegan O’Connor and Amy Jestin.

Well done also to their managers who took care of their training all season and to all teams who took part in the League overall.

Best wishes to Kate Whelan who will travel to the top European Junior event during the summer and also to the Secondary School International event. Paddy Vaughan will as always be on the European trail in the disability class, while commiserations to Dylan Grace and Jessie Hayes who were somewhat unfortunate when Irish selections were made recently for an upcoming international event, it was overall a very fine season for many local table tennis players.