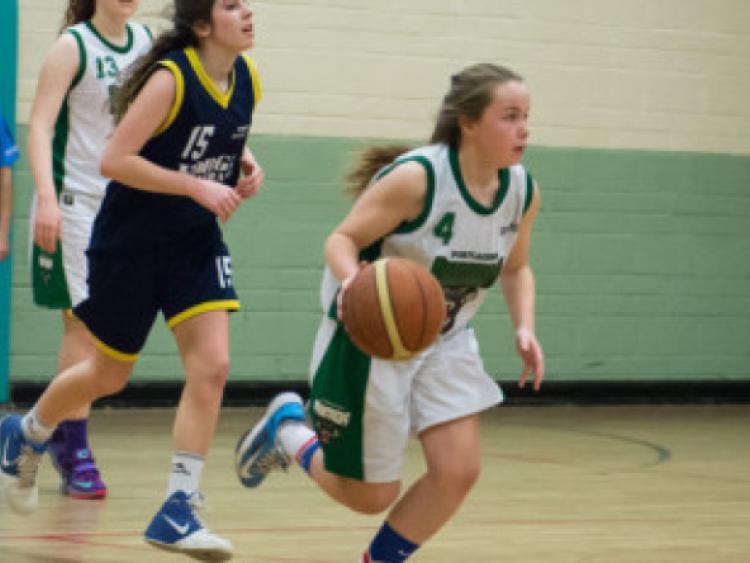 Portlaoise Panthers U-18 girls played host to Tipperary Talons on Sunday in the first round of the Kilkenny Cup.

Portlaoise Panthers U-18 girls played host to Tipperary Talons on Sunday in the first round of the Kilkenny Cup.

Tipperary Talons had already taken victory in the league down in Tipperary so Portlaoise were expecting a tough game at home. Unfortunately Tipp Talons came with just six players and were under strength while Portlaoise had their full panel available.

As a contest this game was over after the first quarter as Portlaoise came out of the blocks all guns blazing. They stood firm in their zone defense and the quick hands of Sarah Phelan and Shauna Vandendries led to quick turnovers which the girls ably converted at the other end time and again. Panthers took an early 18-3 lead after some great transition play.

With Panthers well ahead Portlaoise coaches Catherine and Maeve O’Sullivan had the luxury of rotating all twelve players throughout the remainder of the game giving them all some court time ahead of more important games to come. Both Claire Melia and Sekinat Shabowale were clearing the boards on defense which created open lay-ups for Jennifer O’Neill and Ellen Dunphy.

The Panthers defense was key to their success with both Ellen Healy and Rebecca Grant coming into the game and playing strong defense on Talons main inside threat. Keeping Talons to just twenty three points shows the pressure put on by Portlaoise all round. Shauna Vandendries and Sarah Phelan continued to control the game from the point and quick movement in offense opened up the shooters on the wings with Sarah Preston and Gillian Hannigan getting off some great shots.

Melia was a constant thorn in Talons side as she cleaned up any missed shots on offense and finished strong to the hoop either converting the two points or heading to the line for free throws. Talons to their credit kept going and got some great scores down the stretch but Portlaoise seemed to have an answer to everything.

Orla O’Donovan continued her great season with another great display both ends of the floor. Aisling McCauley was another in great scoring form as she was at the end of the break away on numerous occasions.

Portlaoise ran out comprehensive winners in the end and now look ahead to more competitive games in the Midland League in the run up to the season ending finals.