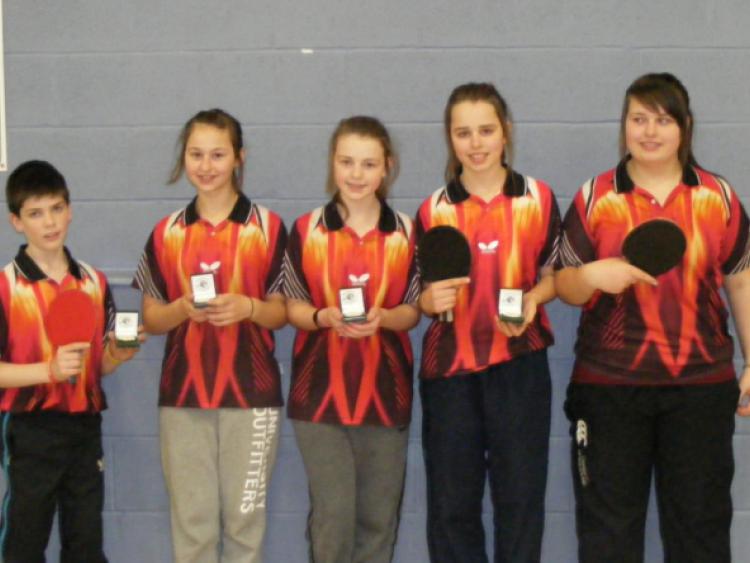 Team One, of Scott Jestin, Kate Whelan and Dylan Grace put in a sensational performance to capture the Division 2 title. Dominating from the start all three players turned the heat up from the off starting, with a stunning 6-0 win over Beech Hill.

They followed this up with a 6-0 crushing of UCD. Moving on to round three they faced a very tough test in the form of West Cork, a major stronghold of table tennis in Ireland. Here Whelan, Grace and Jestin had to up the play to red hot performances as leading Irish players James Kelly, Mary Kelly and Niall O’Driscoll came with all guns blazing to take control.

Early results for Grace with a 3-1 win over Mary Kelly and a 3-2 win for James Kelly over Whelan gave signals of close encounters to follow. Jestin overcame O’Driscoll on a 3-0 scoreline to give Mountrath the edge, but the ever consistant James Kelly had a 3-1 win over Grace to level the game again.

Kate Whelan restored the lead with a 3-0 scoreline over O’Driscoll and Jestin returned to the table to nail a 4-2 victory with a 3-0 win over Mayre Kelly. This result really had Mountrath in red hot form, raring to go again at such a blistering pace that they tore through Leeside with a 6-0 win, never dropping a set to their opponents.

Their final match of the day was to take on the what would be considered difficult at any stage, Kinnagh. Taking on O’Mahony, Kellegher and Barry from the rebel county held no fear for Mountrath, which later showed as they produced a flawless exhibition of aggressive table tennis to dominate their opponents on a 6-0 scoreline. Overall a superb result for the midland outfit as they move up to join the the leading teams in the premier class for 2014 where they will be among the top six in Ireland.

This result takes them into the very challenging Division 2 for 2014 replacing their Team One. Overall a superb weekend of gold for seven fantastic young table tennis players and two coaches from the midlands. For Kate Whelan, Scott Jestin, Dylan Grace, Jessie Hayes, Leanne Delaney, Claire Handcock, Paddy Vaughan, Jimmy Hayes and Amylou Hayes this has set an extremely high bar for any club in Ireland to match.