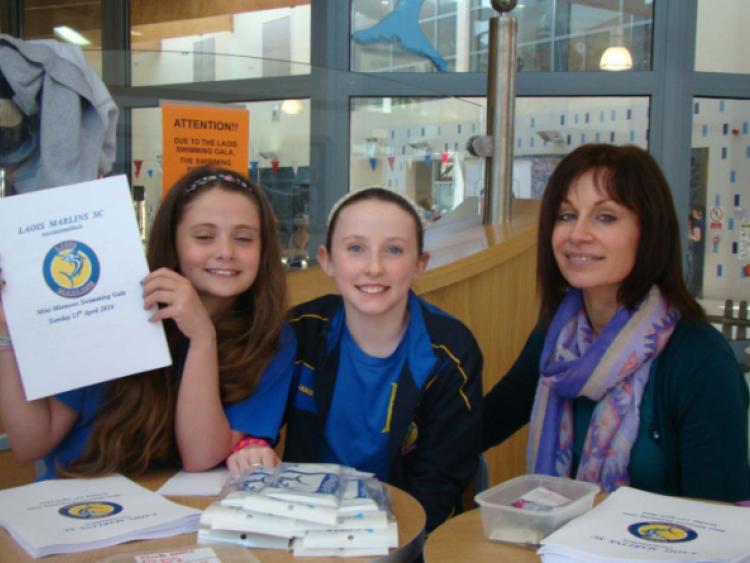 It was a Mini Minnows Gala, catering for less experienced swimmers aged between six and 12, and while medals were presented, the emphasis was very much on fun, with every swimmer getting an Easter egg, sponsored by Bracken’s Gala, after the hugely exciting Cannon Relay finale.

The event was organized and run entirely on voluntary effort, with parents, committee members and Laois Marlins’ senior swimmers stepping up to the mark.

According to club Chairman Kevin Bracken. “It was great to see so many of our young people taking on roles of responsibility, from time-keeping duties to lining-up duties, from selling raffle-tickets to selling the array of fabulous home-made cakes donated by parents, they delighted in doing it all.”

While the Laois Marlins senior squad were busy officiating, the 35-strong junior squad were even busier in the pool. For some it was their first ever gala, and many more were delighted to record new PBs. There were plenty of medals too.

“Winning 38 medals at our own gal really was the icing on the cake,” said head coach Irina Dawson, “but the real prize was seeing how proud our young swimmers were to be swimming in our own club gala.

“The reaction from visiting clubs was great too,” she added. “They all said it was so well organized, relaxed and friendly. They told us that they will definitely be back!”

On the medals front eight year old Valera Zaharovs led the way, taking gold in all four events. Ben Wall also medalled in all his events, taking one gold, three silver and a bronze.

Roisin Bracken narrowly missed out on a medal in the 50m fly, as did Kayla Darcy and Colin McEvoy in the 50m back.

It was also a great gala for Niamh Doyle, Holly Whelan, Ellie Culliton, Kyla Heffernan-Price and Gary Young-O’Shea who represented their club with pride.

A note of thanks from Laois Marlins to all who helped – especially Niamh McDonnell of Swim Ireland, management and staff of Portlaoise Leisure Centre, Laois Sports Partnership, St Pauls Primary School, Bracken’s Gala who sponsored the Easter Eggs and all swimmers, parents and helpers.