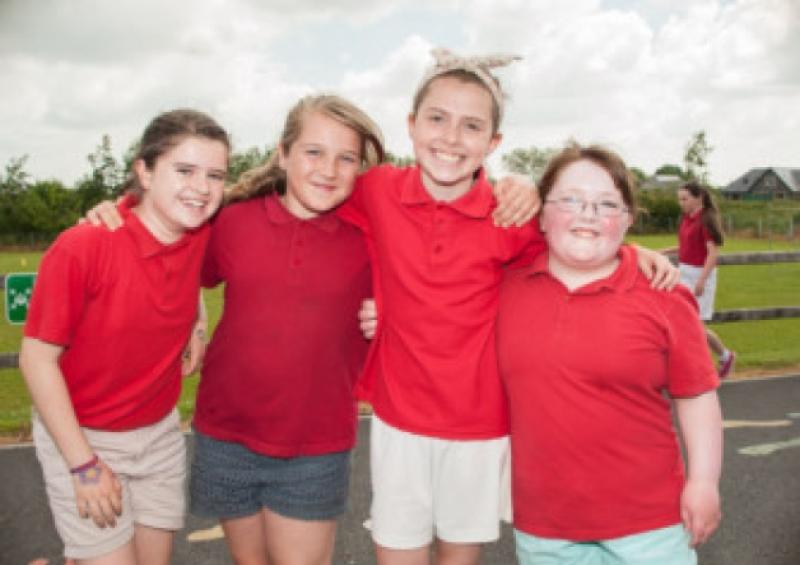 Rath NS have been named winners of the Laois Sports Partnership ‘Active Schools Week’ challenge for 2014.

Rath NS have been named winners of the Laois Sports Partnership ‘Active Schools Week’ challenge for 2014.

The rural school, just three miles from Ballybrittas, were selected above all of the entries to the Laois Sports Partnership for the manner in which they embraced the inclusive nature of the challenge.

For their considerable efforts, they have been awarded €1000 by Colgan Sports, to spend on sports equipment. Presentation Primary School in Portarlington were also recognised for their work during Active Schools Week, as they received a €500 voucher for Colgan Sports.

Rath NS organised a very impressive array of activities, games and challenges for their pupils, with special consideration given to designing games and events which could be enjoyed by all.

Speaking after the presentation of the voucher, school principal Ann Garry admitted that the inclusive nature of the Active Schools Week was a reflection of both the school and the local community. “The ethos of the school would be inclusive of all abilities, but I think it is more so down to the community as well.

“There is a very good, supportive community here. You could see that in the way they sent in their children on bicycles and with helmets, they are very safety conscious, because we ran the cycling programme for six weeks, and you could only take part in that if you wore a helmet.

“Then we extended it to cycling on the road to and from school, and they have been really diligent, the parents, and they have kept it up. You could be out on the roads around here at any time and you could spot the kids out cycling, wearing their helmets, which is great.

“If we can protect them and save a life out of this, it would be brilliant.”

The week of events was organised by teacher Karen Phelan, and she felt the success of the week was down to the fact that there was something for every child.

“The thing with Active Schools Week was that it catered for everyone, it wasn’t just competitive sport. There were games like ‘Throw the Welly’ or just getting water into jugs. I think the pilates and martial arts were important for children

“Really, every day was like a mini sports day, for five days.”

The list of activities organised over the five days i almost too long to mention, but one thing which was a real hit was the tandem bike, which the school got on loan from Laois Sports Partnership. As Ann Garry noted, it gave opportunities to children who might not have had them before. “The tandem bike was a real winner, because there was children who had never been on a bike before.

“They didn’t have access to a bike and they weren’t able to cycle. That tandem bike, for children with disabilites, was great. They were able to get up on it and feel good about themselves.”

That sense of children feeling good about themselves not only drove the Active Schools Week, but it’s also what the staff in Rath NS try to achieve each working day. The staff really got behind the challenge, and the benefits were there to be seen for everyone. “Nobody opted out,” said Garry. “I would say they saw the benefits of it in the classroom as well. Children on the autism spectrum, or children with physical disability, they could feel good about themselves, and that was reflected in the classroom.

“They were in way better form, and they were happier children. And a happy child is all we want in this school, because a happy child will learn, if they feel good about themselves.

“There was nobody who felt ‘Oh, I can’t play football, so I’m never going to be able to do anything’. There was a choice of so many sports really, from throwing the welly to cycling.”

Karen Phelan also thanked the staff at the school for rowing in behind the project. “That’s one thing about the staff here, if there is something they are asked to do, everyone is fully onboard, no matter how much it might disrupt their classroom day. You’d never be afraid to ask for help with this or that, it is a very united staff.”

Presentation Primary in Portarlington also organised an impressive week-long series of activities, which not only encouraged children to participate, but also encouraged them to put themselves in the shoes of people with disabilities.

As a result, they played games like goal ball and boccia, while students were also given the opportunity to devise games themselves, which all of their classmates could play. Because of that, the teachers and students were rewarded for their inspiring efforts.