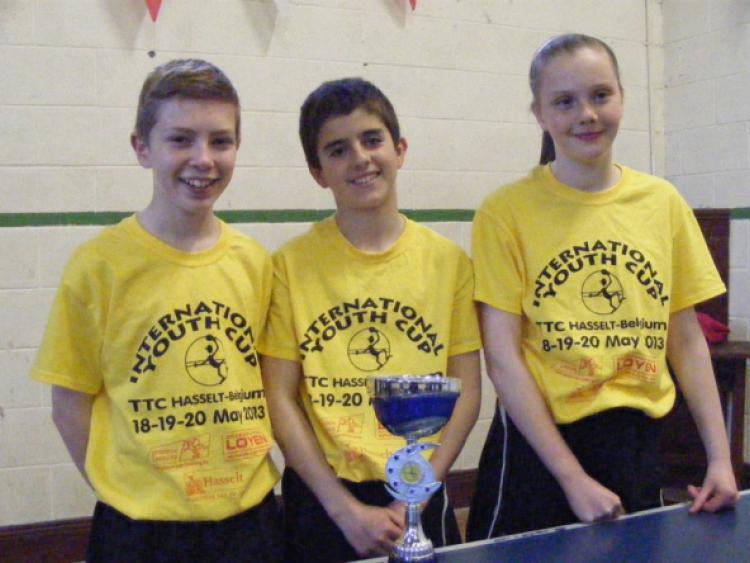 Ground-breaking performances by local players Kate Whelan, Dylan Grace and Tadhg Downey over the weekend in Belgium took the standards of table tennis to a new level for all involved locally.

Ground-breaking performances by local players Kate Whelan, Dylan Grace and Tadhg Downey over the weekend in Belgium took the standards of table tennis to a new level for all involved locally.

They were in action at the International Youth Cup.

Staged in Hasselt, it brings together the leading young players from many parts of Europe to compete for top team and singles champion at five age levels, U-10, U-12, U-14, U-17 and U-20.

Kate Whelan’s consistent form continued as the National U-12 champion cruised through the many rounds. Apart from a close battle and a 3-2 win over the Belgian champion, she took all other matches on 3-0 wins.

In the girls 2-player team event Kate’s excellent form saw her lead the way with the same committed action to dismiss all challengers to take gold with Ciara O’Toole. Dylan Grace and Tadhg Downey were also putting in exceptional displays in the Boys U-12 team event.

They were joined by Eoin Cathcart and James Kelly on team Ireland. The Boys team consisted of three players but the lineup could be changed for different rounds.

Following many stages and knockout rounds the final saw a 3-3 scoreline between Germany and Ireland and the deciding factor would be the doubles match with Grace and Cathcart representing Ireland. Following an exceptional match, the Irish wizards held their nerve and won the match.

In the U12 singles, Grace and Downey were up agains the best from Europe. Downey came up against a tough opponent in the last 16. Grace made it to the semi-finals and eventually won the third place play-off for bronze.

It was a fantastic performance by these young players from the midlands who, along with many other talented players, have taken Mountrath table tennis club to the elite level of the sport in Ireland.

Seven of the players have now gone on to represent Ireland at international level along with three national champions under the guidance of club coach Jimmy Hayes.