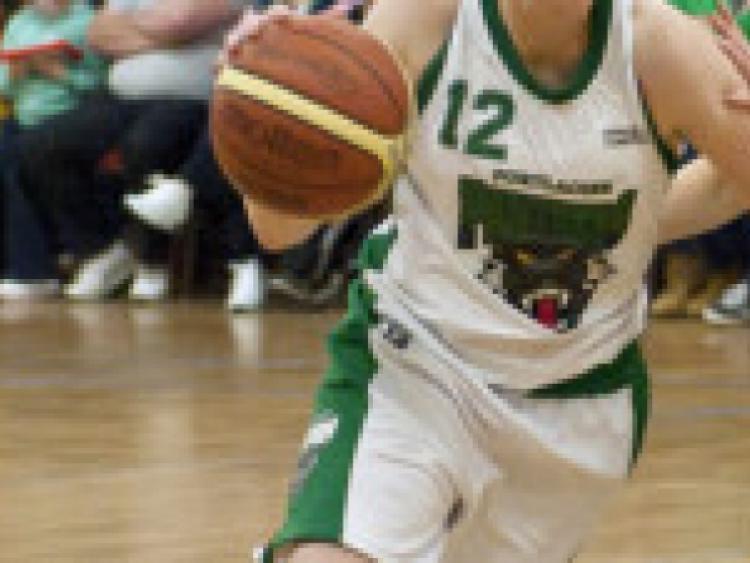 O’Loughlins Panthers ladies National League team finished off their regular season with an impressive twenty nine point win away to IT Carlow on Saturday evening.

O’Loughlins Panthers ladies National League team finished off their regular season with an impressive twenty nine point win away to IT Carlow on Saturday evening.

The ladies impressive second year at this level has seen them double up as National Cup champions and National League regular season top seeds in only their second year in the league.

They will look to now take all trophies on offer as they play host to Oblate Dynamos next weekend in the League Cup semi finals.

The game got off to the best possible start for O’Loughlins Panthers with Catherine O’Sullivan hitting a three pointer off their very first offence. With IT Carlow sitting back in a zone defence the space was always going to be in the favour of the outside players.

Catherine O’Sullivan has plied her trade from the three point line and she was in lethal form in the first quarter with an outstanding four three pointers in total while accounting for fourteen of her sides first eighteen points.

Tracey Fallon and Sinead Melia accounted for the other two scores as O’Loughlins Panthers took a twelve point lead after the first ten minutes of play on a scoreline of 18-6.

The second quarter was much the same for I.T Carlow as they struggled to make inroads into the Portlaoise lead. The visitors were completely dominant in defence and only allowed twelve first half points closing out the home sides main threat Aisling Hayden.

Portlaoise continued to add to their early lead with Sinead Nihill accounting for her teams first four points of the quarter after some patient build up play from Deirdre Tomlinson and Sharon Regan with both adding their own name to the scoresheet straight after.

The O’Sullivan sisters Maeve and Catherine combined for Panthers last eight points of the half giving the visitors a deserved twenty point half time lead.

The third quarter saw Carlow hold their own as both sides went score for score. Portlaoise worked the ball inside on offence with Nicola Farrell and Jackie Coleman scoring four points between them.

Ciara Wogan replied with two baskets of her own from top of the key. Panthers changed things on the defensive end and the changes allowed Hayden in for eight points. At the other end the visitors continued to use the clock with great execution both inside and outside the arc with Maeve O’Sullivan adding two three pointers while Nicola Farrell was clinical inside with two baskets of her own.

Quick ball movement allowed Sinead Melia finish the quarter with a long range two pointer to extend the lead to twenty one points heading into the last.

Catherine O’Sullivan added her sixth three of the day to bring her own personal tally to a game high twenty two points. Grainne and Deirdre Tomlinson continued to work the ball around on offence to great effect with Fallon and Nihill finishing off the scoring down low to give O’Loughlin Panthers their tenth win in this league campaign and top seed in the semi final.

They will now face Oblate Dynamos next weekend with the day and time to be confirmed following print but details of the game will be announced on the Portlaoise Senior Basketball Club facebook page early in the week. Get down and support the girls in the pursuit of a clean sweep of titles this year.