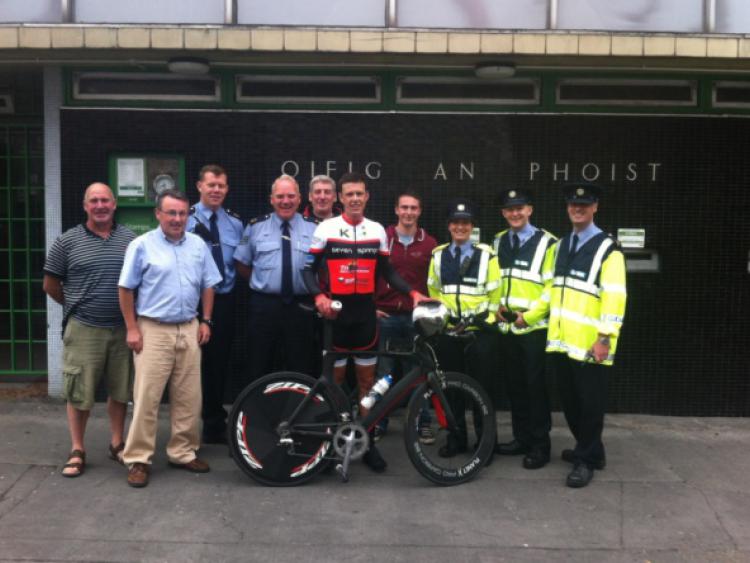 Laois cyclist Eoin Whelan wrote his name into the Irish cycling record books on Sunday, July 13 as he broke the record for cycling from Galway to Limerick.

Laois cyclist Eoin Whelan wrote his name into the Irish cycling record books on Sunday, July 13 as he broke the record for cycling from Galway to Limerick.

The rulebook states the start and finish must be from the Post Office of both cities. The previous record was 2 hours 14 minutes 11 seconds for the 60 mile trek set in 2010.

It ended up being perilously close but Eoin just got home inside the time of 2 hours 13 minutes and 33 seconds, shaving just 38 seconds off the record.

Planning for the attempt began months earlier. An initial trial attempt in April left him 10 minutes outside the benchmark. Aerodynamics are crucially important in a time trialling event such as this. Eoin underwent a number of tests to improve his aero position on the bike and also to ratify the equipment he would use on the day. However, a second trial attempt in June still left him five minutes shy of the record.

Training intensity was ratcheted up a notch for the final few weeks before the attempt and on the day he had the benefit of the slightest of tailwinds.

He departed from Eglington Street Post Office at 6am with an entourage of support cars, and officials from Cycling Ireland in close pursuit. Galway Gardai escorted him out of the city, organising a rolling blockade of all traffic lights and junctions in the process.

At the first timecheck in Oranmore, Eoin was up on schedule by 30 seconds. He blasts through Gort one minute up before the long winding hill towards Tulla in East Clare. The effort on Tulla Hill begins to take its toll and cramp starts to set in. He dug deep but the last time check at the outskirts of Limerick City is disappointing. The earlier gains have been lost and it looks like the record is slipping away.

With just five miles remaining, Eoin emptied his reserves to get to the finish. The Gardai in Limerick assist in traffic management giving him a clear run to the Post Office on Lower Cecil Street. The final effort pays off and he threw his arms in the air when crossing the line, not needing the official timekeeper to inform him that he has just broken the record by 38 seconds.