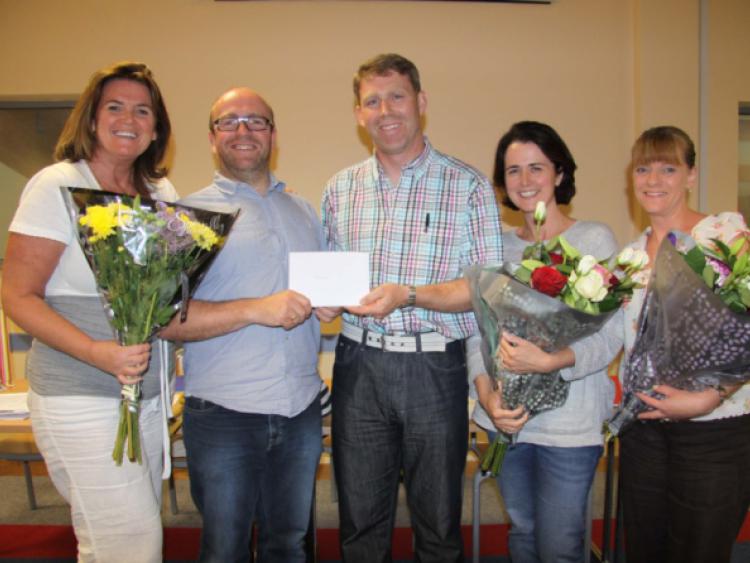 In her address she recalled many highlights, particularly the visit to the club by Irish Olympian and European bronze medalist Barry Murphy, and the inaugural Laois Marlins Mini Minows Gala held in April.

She congratulated all club members not only on their achievements but also on their attitude throughout the season. “We as a club are very proud of all our members and the way in which they represent their club, their parents and communities, but most of all themselves, with great pride, decorum and sportsmanship in everything they do,” she said.

“Members enter into our club as individuals,” she continued,” but we watch as they grow and evolve into team mates, supportive of each other and forming great bonds of friendship which we hope will continue in all they achieve.”

She thanked all coaches and parents for their hard work and dedication.

After four years of fabulous work Violet stepped down as secretary. She was presented with a bouquet of flowers.

A presentation was also made to outgoing Chairman Kevin Bracken, who stepped down after four years of tremendous work. He too reviewed a year of massive achievements for the club and said he felt very proud to have led the club to where it is today.

Treasurer Lynda Scully gave a report showing the club to be in a healthy financial state.

Outgoing Gala Secretary Fiona Donoghue reviewed a very busy year during which a record number of 26 galas were attended. Fiona was also on the committee since the club was setup four years ago. A presentation was made to her as she stepped down from the committee.

Outgoing Club PRO Martina Carew reviewed a year in which “there were too many highlights to mention.”

She was effusive in her thanks to The Leinster Express for the fabulous coverage given to Laois Marlins throughout the year.

She also gave great praise to the children. “They are always a pleasure to deal with,” she said, “ not only in what they do in the pool, but also the way in which they are fabulous ambassadors for the club where ever they go.”

She stepped down as PRO after three years.

“You give them wings to fly,” Head Coach Irina Dawson told parents at the AGM. She highlighted the fabulous progress made by all swimmers at the four year old club, and thanked all who have contributed to their success.

Leinster Development officer from Swim Ireland Aisling McKeever attended the meeting, and congratulated swimmers, coaches and parents for their huge efforts. “You have big shoes to fill,” she told the incoming committee, “but I am always at the the end of the phone if you ever need me. She praised the club for “the ongoing positive interaction with Swim Ireland.”