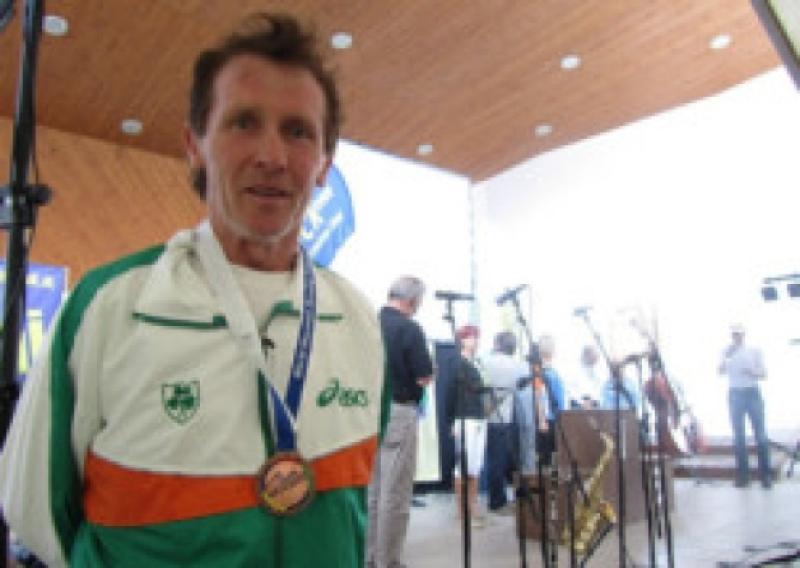 The farmer from Crubbin, Ballyroan was in his mid twenties when he took up running with Portlaoise Athletic Club, and has been a top class performer in Cross Country, Road and Track events ever since, winning titles in Laois and Leinster, as well as National championships over the past 30 years.

Martin has been one of the driving forces in the Ballyroan Abbeyleix and District Athletic Club, which is now in its fourth year. In the early nineties he took up mountain running with amazing success as he won open and Irish titles at varying distances and heights.

Martin’s success is based on a regimental training routine, seven days a week, all year round, and his world bronze medal winning performance in Austria ranks with his greatest achievements.

The world event in Telfes was over 7.5k with a rise of 3,000ft and finishing at an altitude of 6,000ft. As Martin lined up with 81 competitors, he was in the leading group from the off with Russian and German competitors to the fore.

At the halfway point the leaders group was down to six, with the Ballyroan man battling bravely, and and was well in contention for a top three finish. With 3k to go Wileim Dangler of Germany made a decisive break which took him to victory, and it was a fiercely contested final 3K for the silver and bronze medals.

Martin was involved in a three way battle with Leonid Tikhonov (Russia) and Franz Prager (Germany), and while he gave his best to catch the Russian, Tikhonov crossed the line eight seconds ahead of him. McDonald did, however, hold off the determined Prager to claim the bronze medal and make it a podium presentation as the tri-colour floated over his head, a proud occasion for the genial Martin.

The altitude height finish of the race made for an interesting comparison, as the finish was over 3000ft heigher than the highest mountain in Ireland, Carrauntoohil in Kerry, which stands at 3406ft.