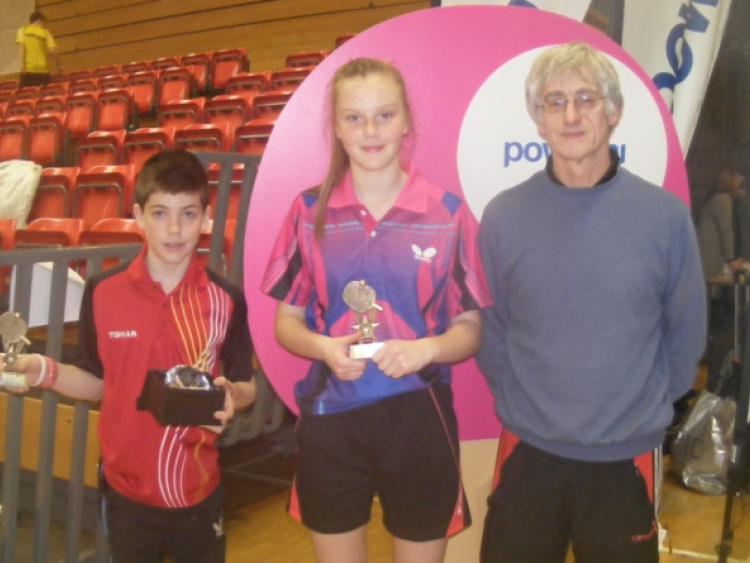 Lisburn Racket center provided a whopping 26 tables for Round 2 and the most recent National event of a five-round calendar, while Palmerstown staged the latest round of Leinster Ranking.

Lisburn Racket center provided a whopping 26 tables for Round 2 and the most recent National event of a five-round calendar, while Palmerstown staged the latest round of Leinster Ranking.

Star of Lisburn had to be the amazing Kate Whelan.The Mountrath club player made her way to the tables in early morning and when she captured gold in the late evening she had delivered an amazing run of winning every match from first round to and including the final 3-0.

This result puts her in the driving seat for the national title as she heads into Round 3 in Castlebar this coming weekend. Her excelent form also carried her through many tough rounds at U-18 where she played very inspiring table tennis to reach the semi-finals and a clash with Munster and Irish hotshot Cloe O’Halloran.

While Whelan’s form had really peaked following a very committed training scedule in recent times, many would still have felt that O’Halloran was still much too strong and difficult to overcome. However, Whelan rose her game to another level not seen before as she dominated her opponent with mental strenth and a fine game plan outlining how great a player she really is, taking the result 3-1.

She was now in the final, where her opponent was National ladies senior champion Hannah Lynch-Dawson. Exchanging sets as the match progressed and under preasure Dawson found a new level with increased speed and power and slowly got the upper hand to capture a well earned gold.

Irish star of Para table tennis Paddy Vaughan had another fine weekend as the world number three Junior took the honors in the mens senior event to add to his ever growing trophy cabinet.

Dylan ‘The Amazing’ Grace continued to astound all around him with his excelent footwork, good balance and fast action as he moved through many difficult games to record excellent victories and captured a well earned Bronze in U-15 Boys. He also delivered many fine victories in U-18 boys as his game continues to grow in notches at every event.

Good position finishes also at U-13 for Richard Thompson and Tiegan O’Connor as they continue to make steady progress. However with places up for grabs on Ireland’s upcoming primary schools team both must raise their game with increased effort to reach semi-final stages at least to be in the shake up when selection comes about.

This opportunity will come about at the weekend in the Connaught Junior Open when there is lots to play for and both players can continue to improve and show how good they can really be.

Whizz kid Dylan Grace had up an amazing Leinster capture of U-15 and U-18 Boys recently where he brushed aside Tom Davies, Conor Gallagher and pocket-rocket Art McGloughlin,all truly fine players. Good performances also from Scott Jestin and Rathdowney’s John Mansfield at U-18.

With Kate Whelan absent it opened the door for many players to battle it out at U-15 and U-18. The Leinster weekend was also particular rewarding for many Mountrath club players who picked up Leinster player of the year awards for 2013/14 in different age groups, these included Scott Jestin, Amylou and Jessie Hayes, Dylan Grace, Tadhg Downey and Leanne Delaney. All fine young players with a lot of talent.

However, along with players there must be trained and experienced table tennis coaches and much recognition must be given to Edward Thompson and Amylou Hayes for their huge supporting role to club coach Jimmy Hayes at all provincial and national events as they develop their coaching experience and skills in preparation for upcoming Level 1 coaching courses and badges.