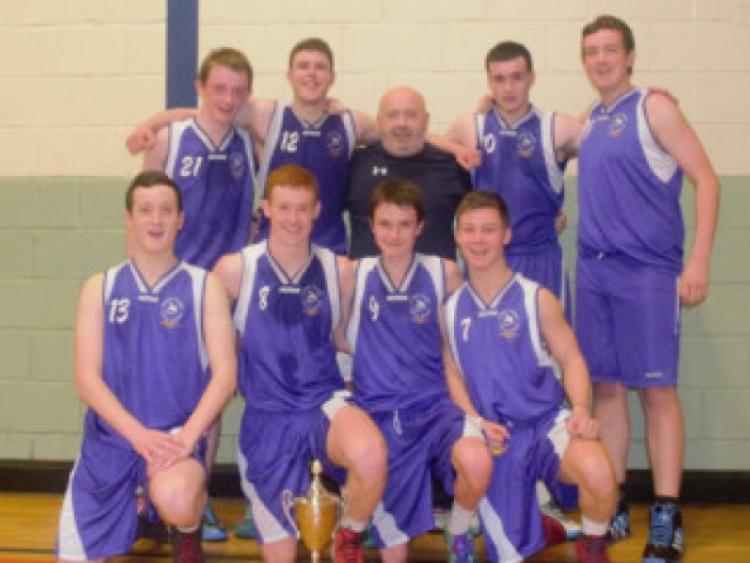 Spectators lucky enough to be in St Marys Hall Portlaoise last Wednesday afternoon will have witnessed one of the best schools game ever played in the region in hte Midland Schools U-19 Boys A Final.

Spectators lucky enough to be in St Marys Hall Portlaoise last Wednesday afternoon will have witnessed one of the best schools game ever played in the region in hte Midland Schools U-19 Boys A Final.

The final pitted Kestrels’ two feeder secondary schools, club team-mates and great friends against one another. Unfortunately sport can be a cruel friend sometimes and Rathangan will be feeling the pain this week but neither team deserved to lose this game.

Featuring so many quality players on both sides this was a great example of what’s good about basketball, the skills, the athleticism, the see-saw of emotions, the sportsmanship and the respect shown to each other.

One of those elite athletes, Aaron Whelan got Rathangan off to a flying start with a lightning fast drive to the basket seconds after tip off. If this was a signal of intent from the Kildare side then Colm Murphy showed Colaiste Iosagain were up for the battle and levelled matters with a superb finish of his own at the opposite end of the floor.

Whelan and James Byrne scored the next four from the stripe after rapid ball reversal led to fouls. Sean Smith responded for Portarlington with a jump shot and Jordan Fallon made it all square again with a nice finish. It was International versus International at the end of the first quarter as two brilliant fast break finishes from Aaron Whelan were matched by a jump shot and a brilliant three pointer from Smith to end the period. Colaiste Iosagain led 15-12.

Rathangan played their best basketball in the second quarter as Byrne, Ciaran Maher and Shane Maughan started to find their range. Their intense defence stifled Portarlington’s scoring opportunities and it looked like they would pull away.

This is a gutsy Colaiste Iosagain team full of character and spirit though and they managed to stay in touch with a couple of strong driving baskets from Smith and two long ranges treys from the irrepressible Jordan Fallon. Rathangan still managed to carve out a healthy lead though and it finished 34-27 at the half-time break.

Smith was up for this game after a trouncing by the same side earlier in the season which would have hurt his pride. He took over the game in the third period scoring 11 of his 33 points. He did everything. He bossed his own boards, he made steals, he scored from inside and outside and Rathangan were stunned.

It was not only about how much he scored but it was the quality and efficiency of his play that was remarkable for such a young player. All the ground they had lost in the second quarter was recovered in these eight minutes but the momentum of the game had shifted. Smith had thrown down the gauntlet and it was going to take a brave effort to stop him. It was 40-40 but Colaiste Iosagain were in the ascendency and the pressure had shifted.

Shane Maughan launched and landed a long range missile to start the fourth and but Smith somehow managed to come straight back down the floor and like an old gunslinger he levelled matters within seconds. The crowd were in raptures.

One of the heroes of the afternoon, Port captain Colm Murphy finished another lay-up. He only had four points all game but he was ran the offence brilliantly as well as trying to contain one of the best talents ever to play in these parts in Irish International and Premier League star Aaron Whelan.

An act like Whelan can never be fully contained though and he nailed a huge three under pressure to tie the game with two minutes remaining. The Fallon and Geoghegan names have long been synonymous with Portarlington basketball and the latest versions in Jordan and Matt further enhanced their families reputations with two huge plays.

Fallon hit a massive three pointer and Geoghegan got fouled and hit one from two from the free-throw line under the most intense pressure.

Just when it looked like it could be Colaiste Iosagain’s day James Byrne went down the other end, got fouled and proceeded to hit four free throws in a row to put Rathangan in the lead 54-53 with 20 seconds to go.

This was an epic, unbelievable see-saw battle every single inch of the way. Inevitably it fell to Smith to crown an outstanding display with the final play of the game. Buried deep in the corner he faked a shot, wrong footing his defender and managed to drive baseline and launch a running floater that hung in the air for what seemed an eternity before rattling around the ring and dropping through the net to secure the victory for the Portarlington school.

What a remarkable game and a tribute to the two coaches, Martin Conroy and Nacola Nerney as well as anyone else that has ever been associated with any of these sporting players.