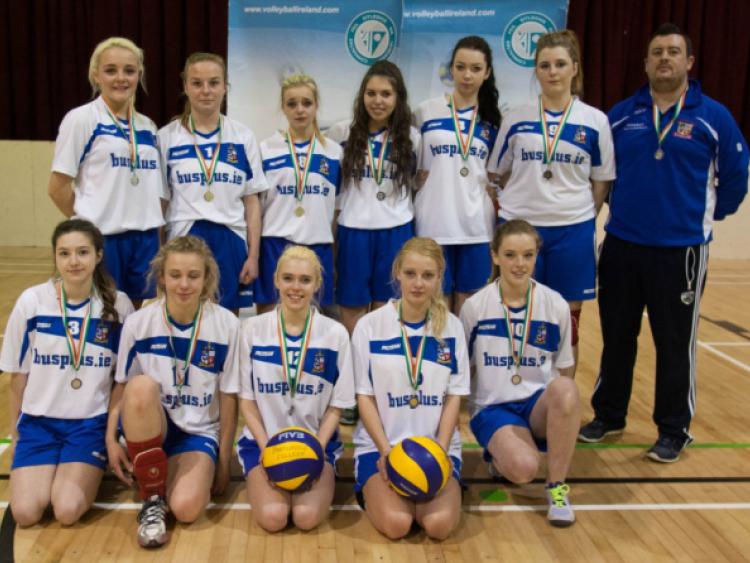 Portlaoise College were looking to create history as the first school ever to win the Senior C and Senior B volleyball titles back to back, after victory last year in the C final against Athenry VS. Kilkenny were back in the B competition after a couple of years in Senior A.

Nerves were clearly present early in the first set, as both teams struggled to find form. Portlaoise soon settled and built an early 9-5 lead with Amanda Bland and Marta Kirmuska dominating the game. Kilkenny finally got their game going and drew level at 14-14 with Eimear Corr and Anna Walpole impressive.

The next ten scores were evenly shared with both schools producing excellent volleyball. Portlaoise then introduced Mada Bergmane to serve and she helped Portlaoise to the next four scores to give Portlaoise command of the set. Kilkenny were not giving in though and responded in kind to reduce the deficit to one at 22-21. Vicki Myja’s serving pushed Portlaoise to set point but again Kilkenny responded. Just as the momentum appeared to swing in Kilkenny’s favour, a Kilkenny error handed Portlaoise College the first set 25-23.

Pres Kilkenny started the second set most impressively and built an early 5-1 lead. Despite a Portlaoise College timeout, Kilkenny stretched clear through some fantastic hitting particularly from Anna Walpole. Portlaoise attempted to narrow the deficit but every time Portlaoise won a point, Kilkenny responded immediately. Their serve receive was outstanding against powerful serving most notably from Klaudia Putkowska and Amanda Bland. Portlaoise couldn’t break this defence and were 18-9 down at the next timeout. The re-introduction of Leah Murphy and in particular Aava Hearns steadied the Portlaoise team but Kilkenny kicked on to win the second set on a 25-11 score line.

Again the momentum appeared to be with Kilkenny as the game entered a final decisive set. But Portlaoise showed fantastic strength and character and took charge of the set early on. This period of the game produced high end volleyball with both teams attacking and defending strongly. Rallies were long, tense and exciting as both teams increased the drama for the large vocal crowd.

At 11-8, through the serving of Pamela Malec, Portlaoise College appeared in the stronger position. A Kilkenny timeout helped to refocus the Kilkenny girls and they narrowed the score to 13-12 at the half way point of the set. At 14-14 the game appeared to be a knife edge and could go either way. However Presentation Kilkenny had other ideas as they stormed into a commanding 19-14 lead with five points on the trot. Portlaoise College called a timeout to try and stem the flow but to no avail as the older Kilkenny girls full of confidence closed out the set 25-15.

All of their team are in 6th year and this was one of the decisive differences between the teams, as only three Portlaoise College girls are in 6th year. For Portlaoise College captain Amanda Bland, Aava Hearns, Marta Kirmuska and Vicki Myja were most impressive. It has been an amazing journey for these girls as it is only three years ago that volleyball was introduced into the school. Next year the girls will take their place at the top table of schools volleyball in the Senior A competition.