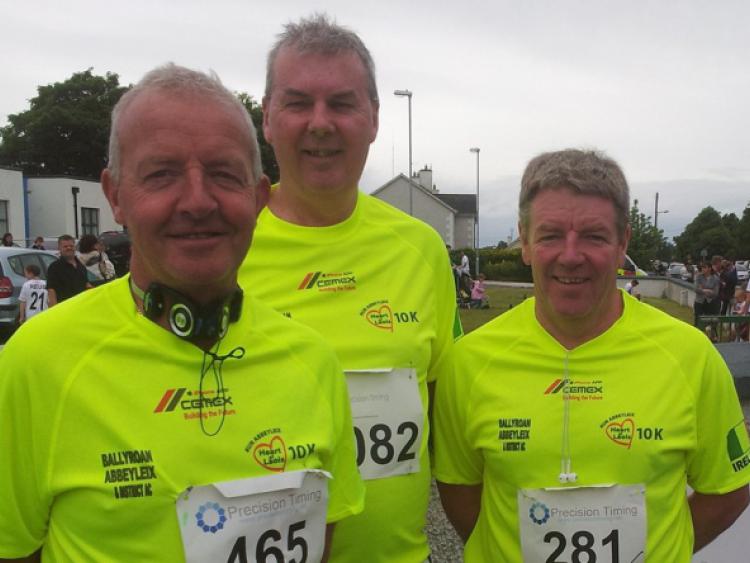 The Ballyroan Abbeyleix and District club hosted the second running of its flagship road race, the Heart of Laois 10k on Sunday June 16th in Abbeyleix.

The Ballyroan Abbeyleix and District club hosted the second running of its flagship road race, the Heart of Laois 10k on Sunday June 16th in Abbeyleix.

We had a fantastic field of 249 athletes of all abilities on what turned out to be an ideal day for distance running.

The stage was set and with large numbers of club athletes arriving from as diverse locations as Kenya, United States, Romania, Cavan, Waterford, Tipperary, Kildare, Wicklow, Dublin, Offaly and of course our own lovely Laois.

A fantastic spectacle was guaranteed with the presence of two international calibre athletes in the shape of Freddy Keron Sittuk from Kenya and Gary O’Hanlon. Freddy who prefers to go by the name Kiprotich is a professional runner from Kenya. Gary, who is now approaching veteran status runs in the colours of the famous Clonliffe Harriers and is a prolific road race winner in Irealand.

On the womens side we had Dundrum AC’s Dymphna Ryan. Besides from these we had many high quality club athletes lining out guaranteeing a colourful and highly competitive spectacle.

Race headquarters was Scoil Mhuire and we had a carnival athmosphere laid on with music and commentary provided by DJ Broughan O’Reilly from Portlaoise.The race began near the junction of the Ballyroan Road and the Green Rd and continued out the Ballyroan Rd. in the direction of Ballyroan.

At Newtown Cross the athletes turned left into Newtown. This stretch along Newtown had about a mile of fast flat running. The athletes crossed the small bridge over the Gloirin River and almost immediately turned left onto the Mill Road and into the townland of Mounteagle. These unspoiled rural arteries were totally cleared of traffic giving the athletes a free unhindered line. At the end of the Mill Road the runners turned left, crossing the Gloirin again in Mounteagle at the 7km point.

Along this stretch in Raheenabrogue a couple of tough hills were negotiated as the runners headed for Larchfield Cross where they turned right back onto the Ballyroan Rd. to run towards the finish in the direction of Abbeyleix. The course was almost entirely cleared of traffic providing a safe running line and experience for everybody.

The race was won by the Kenyan Kiprotich for the second year in succession in a blistering time of 31.12 in the process claiming the winners cash bonus by finishing in under 32 minutes. Gary O’Hanlon had to be content with second in a fast 31.29. Nothing seperated these two for 8 of the 10km before the younger Kenyan broke O’Hanlon’s resistance to open a winning gap of about 50 metres.

We then retired back to Scoil Mhuire for refreshments and prize giving. Scoil Mhuire are to be complimented for sponsoring such a wonderful headquarters which certainly was such a natural fit for the Heart of Laois 10k. We would also like to thank the local Gardai, stewards, Order of Malta and the following local businesses: Cemex, Oldtown Construction, Leinster Sports Clinic, Liam Fitzpatrick Tyre and Battery, Pascal Whelan Veterinary Surgeon, Booth Concrete, Abbeyleix Credit Union, Dunne Design, Glanbia, Nature Valley Granola Bars, Norah McGrath.

Well done to each and everyone as you are all winners for making the race an outstanding success.w