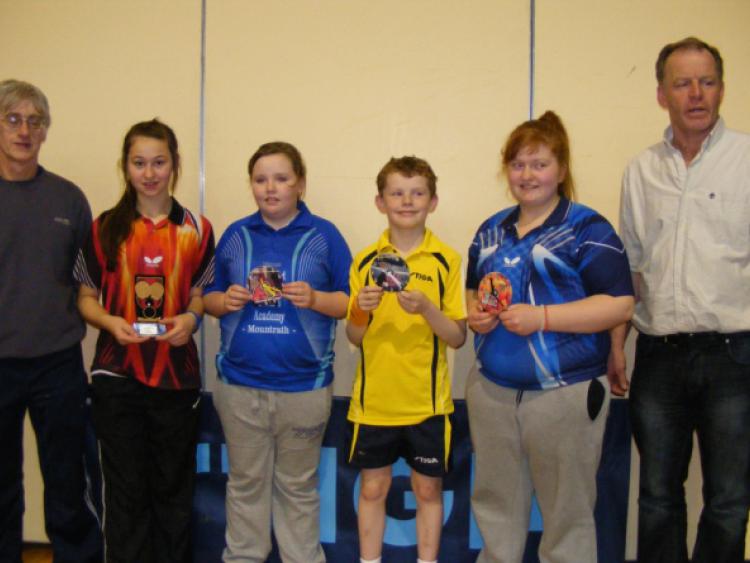 All Ireland table tennis took centre stage in the INEC Killarney over the weekend, where many midland players were competing with success in this national event.

All Ireland table tennis took centre stage in the INEC Killarney over the weekend, where many midland players were competing with success in this national event.

Among those who were in elite form were Kate Whelan in U-15 and Jessie Hayes in U-13 as both took silver, while Paddy Vaughan in U-13 and Amy Jestin won bronze medals.

Dylan Grace, competing in U-15 caused the upset of the weekend by beating two-time national winner Evan McGovern in the quarter-finals, but came unstuck against eventual winner Charlie Fityzgerald in the semi-final. Grace later went on to win Division 2 gold in the U-18 event.

Division 2 gold in U-13 was also won by Tiegan O’Connor, while Richard Thompson in U-11 and Katie Hayes in U-14 collected well earned silver. Corinna Hayes collected bronze in the U-11 comeptition. In the battle of the clubs, Mountrath TTC took second place in Ireland, just behind Leeside TTC from Cork and ahead of Club Donic from Dublin.

Jack Carroll from Ballyroan TTC also had an excellent Division 2 event where he collected silver. The next national event will be staged in Castlebar on March 22 and23.