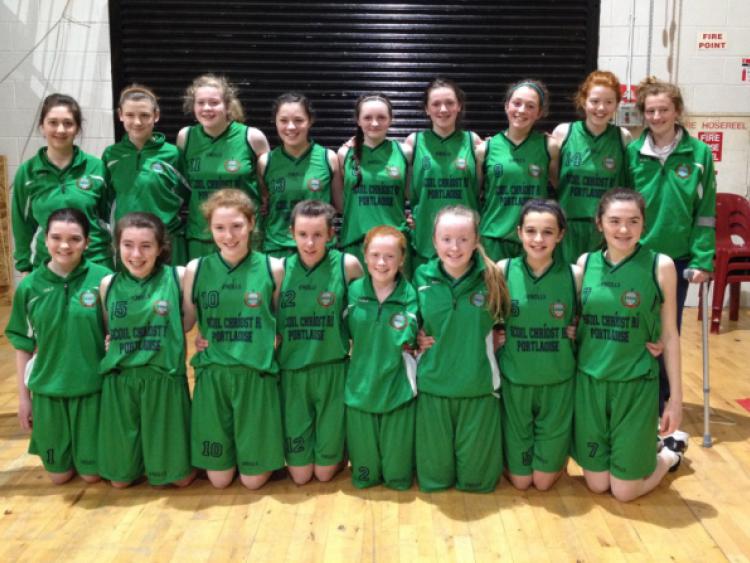 Scoil Chriost Ri won the sixth Basketball All Ireland in their history and their first since 1999 when they defeated Oiriall Monaghan in the U-14 B Cup Final at the National Arena on Wednesday last.

Scoil Chriost Ri won the sixth Basketball All Ireland in their history and their first since 1999 when they defeated Oiriall Monaghan in the U-14 B Cup Final at the National Arena on Wednesday last.

Capitalising on a superb second quarter display, the Portlaoise side led from the front to run out 35-18 winners at the National Basketball Arena.

While Phelan led all scorers with an impressive 20 points, she was ably assisted by a unified team effort that stifled the potent Colaiste Oiriall attack throughout.

Leading by just three points entering the second period, Chriost Ri exploded into life at the restart with Phelan and Alice Dunne getting a basket each before Phelan scored four straight to inflate the team total to 19 and Oiriall trailing in their dust, managing to get to just eight by half time.

With the advantage on the scoreboard, Chriost Ri definitely looked the more settled side throughout the second half as they moved the ball with more fluency.

While Oiriall players Ni Ghiolla Bhride and Aisling Ni Ghallachoir continued to pose real threats, the Chriost Ri pressure defence never relented and although their offence did dry up somewhat in the third quarter, they still held a ten point lead going into the fourth.

From that point on there was to be no further drama and when a final basket from Chriost Ri’s Ellen Connolly sailed through the net in the dying minutes, the scoreboard read 35-18 to the Portloaise school.

While this has been a fantastic year for the U-14s, there is a chance of yet more success for the First and Second year teams in the coming weeks.