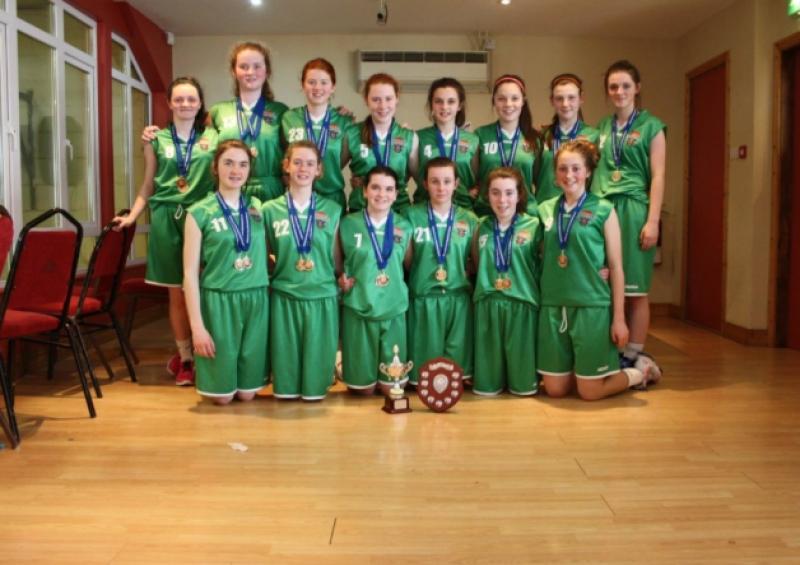 After a great season, the U-14 Midland League winners, Portlaoise Panthers, were looking to book their place in the Top 4 final, the pinnacle weekend in the juvenile calendar.

After a great season, the U-14 Midland League winners, Portlaoise Panthers, were looking to book their place in the Top 4 final, the pinnacle weekend in the juvenile calendar.

Portlaoise faced Athlone in their semi-final. The two sides met just weeks earlier in the league, so both had a good measure of each other.

Portlaoise started the better of the two sides. They pushed the ball well down the court in their fast break game and were well ahead at the break. The second half saw all players working hard for each other and at the final whistle the Panthers girls had a final to look forward to on the Sunday.

Portlaoise faced local rivals Kestrels in the final. They had played each other twice previously in the league with each team carrying one loss and one victory into the final, which made for a very exciting game.

The first quarter was a very close affair with both teams looking to gain a foothold in the game. Erone Fitzpatrick controlled the point; spraying the ball to Sophie Delahunt and Amy Byrne to great effect, while Lauren Dwyer and Eimer Healy worked hard under the boards. Portlaoise clocked up great scores from both inside and outside and Portlaoise lead after the first quarter 12-7.

The second quarter continued in the same vein with both teams battling hard for scores. Maeve Phelan carried the ball well and with Leah Ethon and Ellen Connolly filling the lanes on the fast break, Portlaoise clocked up some fine scores. Ailbhe Griffin and Shona McKittrick had to be at their best to keep on top of Kestrels inside players who continually pressured the Panthers defence.

Kestrels battled hard and at the half time break a gap of five points separated the sides 20-15 to Portlaoise.

The second half saw in introduction of inside players Maria Luttrell and Roisin Quigley who made an immediate impact. They worked tirelessly under the baskets out letting the ball the Maeve, Erone and Amy who finished the score on the fast break.

This was the Panthers best quarter clocking up 20 points and giving the team a comfortable lead going into the last quarter.

The last quarter saw the home side working hard for each other and continued to add to their points tally. Kestrels never dropped their heads and battled until the final whistle. Portlaoise ran out winners at the end but the scoreline did not reflect the tightness of the game or the sporting manner in which it was played.

A great standard of basketball that was enjoyed by everyone.