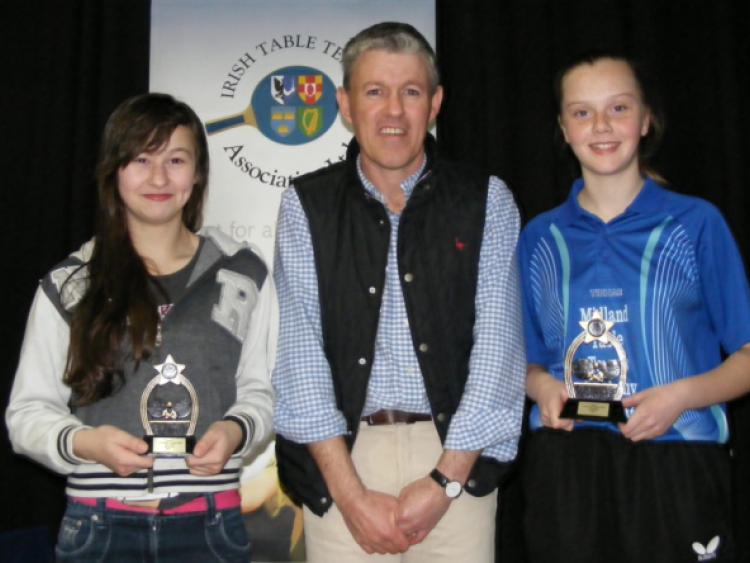 Talk to anyone who attended the latest All-Ireland Table Tennis event in Castlebar over last weekend and they will instantly marvel at the sheer class and dominance of Kate Whelan.

Talk to anyone who attended the latest All-Ireland Table Tennis event in Castlebar over last weekend and they will instantly marvel at the sheer class and dominance of Kate Whelan.

The ability of this young 13 year old from Ballyroan came to the fore in a top U-18 event where she had to overcome challenges along the way.

One of three players from Mountrath Table Tennis Club to compete in this age group where she reached her first final in this category. Her opponent was International competitor Katie McClone.

The Dubliner needed to fall back on all her experience to edge the result this time around.

Next up for Whelan was the U-15 event. She eased her way towards another final where Kerri O’Mahony would stand in her way, but she executed a 3-0 result with ease.

There were many other excellent performances involving other players from Mountrath TTC in the Breiffy Woods Arena. Last season’s U-13 joint national champion Dylan Grace found that moving up an age group is an enormous challenge in its first year. Despite this he continues to deliver extremely high performances.

He found himself in a group with the best three players in Ireland In two blistering performances and closely faught encounters he outshone Eddie Ditchburn (Mayo) and James Kelly (Cork). However, the demands of these two matches exhausted Grace. He was up against Genadi Isac a player he would normally have a result over but on this occasion circumstances favored the Dublin player. Its important that young players like Grace are not forced or expected to perform miracles at every turn but rather be allowed to enjoy the game and reap the benefits

Also in action U-13 player and current Leinster number one Jessie Hayes was in supreme form. However in the closely fought semi-finals she narrowly lost out but continues to progress her game in the right direction.

At the younger age level Richard Thompson’s continues his good progress which saw him collect Division 2 winners medal. There were many other superb performances over the weekend involving Paddy Vaughan, Leanne Delaney and Amylou Hayes did not go unnoticed. Twelve year old Vaughan has to be regarded as extreme talent. Not alone is he Irelands leading disability player but also an incredible player at all levels who has also competed abroad.

Overall a very satisfactory All-Ireland event for many local players and Coach Jimmy Hayes where many hours of training and commitment each week bring success.