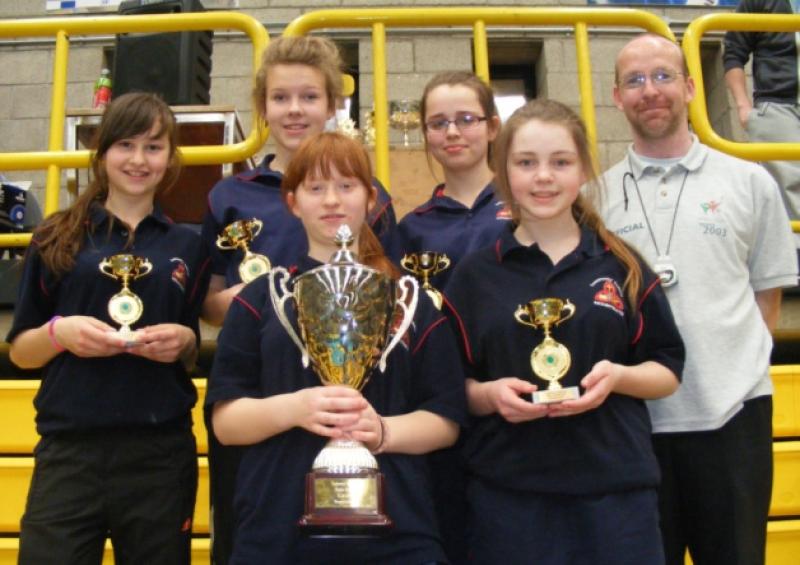 Mountrath Community School have made a really big mark for themselves in schools table tennis.

Mountrath Community School have made a really big mark for themselves in schools table tennis.

Hot on the heels of their recent success as Leinster and Irish Schools League Champions they captured their third major event for 2014 with the Leinster Schools TT Cup in UCD recently.

The team of Jessie Hayes, Leanne Delaney, Claire Handcock, Nadia Krawczun and sub Hailey Hayes pulled out all the stops to demolish their opponents without dropping a set along the way.

That form saw them reach the semi finals where they continued their impressive run to beat outgoing champions Guardian Angels of Dublin 6-0.

Their opponents in the final were another City team, St Ronan’s of Deansrath. While a close final could be expected, and there were some very exciting sets along the way, Jessie, Leanne, Claire and Nadia produced a combination of high quality shots, aggression, speed and consistency that never allowed their opponents to settle into the game.

The result was that they were 4-0 up when the singles were completed and the doubles still to be played.

Here Jessie and Nadia pulled off a 3-0 win while Leanne and Hailey had a close battle and showed some kindness to their opponents with a 2-3 result.

Overall a year of glory for the Midlands with Mountrath Community School capturing Three elite events in schools table tennis.