Panthers recruit Wolfe as they bid for further success this season 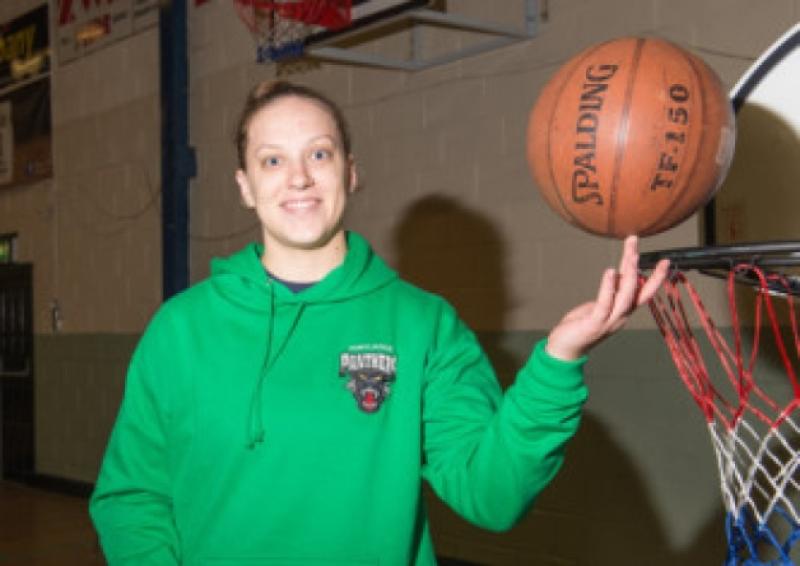 Portlaoise Panthers’ reach has extended across the Atlantic, after they welcomed American Kelsey Wolfe to the club last week.

Portlaoise Panthers’ reach has extended across the Atlantic, after they welcomed American Kelsey Wolfe to the club last week.

The University of Virginia graduate landed in Portlaoise last Monday, and will take up a coaching position within the club’s juvenile setup, as well as lining out with their already impressive Ladies senior team.

Speaking to the Leinster Express on Saturday, Wolfe revealed how she took up the chance to coach in Portlaoise for the next five months. “A coaching opportunity, to help out with the Portlaoise Panthers came about, and I’m also going to be playing with the senior team.

“I ended up in Portlaoise and I’m really excited about it, it’s great to be involved with this club, there is a great family atmosphere.”

Irish basketball has seen a raft of American players come over to ply their trade here, and Wolfe could well turn out to be one of the biggest successes the ladies game has seen here.

She played in NCAA Division 1 with the Universty of Virginia Cavaliers, the highest level of college basketball in the USA. She was one of the stand-out players for the Cavaliers too, and the only member of the team to start every game last season.

Add to that her ranking in the top 15 in the country in free-throw percentage, while she also had a team-high 88 assists last season. Last season also brought countless other personal milestones, and she has had a very productive four years in Virginia, despite suffereing a cruciate ligament injury in her third season.

It is an impressive CV that she has already built up, but when asked what kind of player local basketball fans can expect to see, Wolfe admits she’ll be happy to do whatever the team needs of her. “I’d probably say you could characterize me as versatile, an outside game and an inside game. I told Peter (O’Sullivan, head coach) I’ll do whatever the team needs me to do, whether that’s bringing down the ball or playing post.”

As well as a new country and new team mates to get to know, the Maryland native will also have to get used to a new lifestyle. The student enrolment at the University of Virginia is roughly the same as the entire population of the town of Portlaoise. In many ways it’s a new world she finds herself in, but she admits that’s not necessarily a bad thing. “Yeah, it’s different, but it’s a good different. The hall is smaller but there’s a better atmosphere when the gym is smaller, so I’m excited to see the fans come out and support us.”

Her life as a student athlete is also over, and there will be more adjustments to be made there. The life of a student athlete in a Division 1 college in the USA can be a very intense one. Students can be expected to train twice a day, as well as keep on top of college course work (Wolfe has a degree in Kinesiology), and now she will have a new structure to her day, which she will have to adapt to.

“It’s definitely different, and it puts more pressure on me to make sure I’m staying in shape and practicing as much as I have to.”

She will now come into a team that already enjoyed it’s fair share of success last season, winning the national cup final and narrowly missing out on the league title. Improving on that is already the goal for the season ahead, and with the reputation surrounding American players, there will be some pressure on the new recruit to hit the ground running. She knows the pressure to perform, given where she has come from, will be there, but she’s not letting it get to her. “Yeah, I guess it’s a little pressure, but I’m just going to do out there and have fun and I’ll just do whatever the team needs me to do, whether that’s scoring or rebounding or anything else.”

She has already been introduced to her new team mates, with a beaming smile flashing across her face when they are mentioned, which is a not-too-subtle hint that she has settled in well so far. Having come a long way from home, she has been thrilled with the reception.

“Yeah, they’re great, we’re really gelling on and off the court, which is good and it helps, being away from home, having that team that you can go to and hang out with.”

The chance to get out on the court and play some games will help her settle in all the more, and she hopes it will help her to pursue her long term goal of forging a career in the sport. “Basketball is taking me places, great places like Portlaoise, and I’m just excited for the opportunity to coach and then to continue playing, which is ultimately my goal.”

For basketball fans locally, they will be lucky enough to get first hand experience of the next stage of Kelsey’s career. Check out Portlaoise Panthers on Facebook and Twitter for information on their upcoming games.