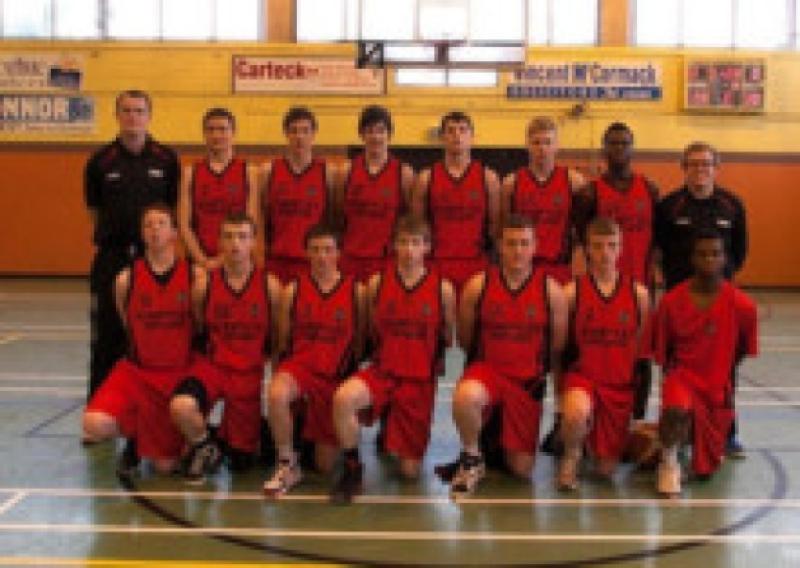 A thrilling All-Ireland semi-final saw Portlaoise CBS narrowly miss out on a trip to Tallaght. A match described by Super League star Matthew Hall as “the best school game he has ever seen”, went to triple overtime only for CBS to lose by a single point.

A thrilling All-Ireland semi-final saw Portlaoise CBS narrowly miss out on a trip to Tallaght. A match described by Super League star Matthew Hall as “the best school game he has ever seen”, went to triple overtime only for CBS to lose by a single point.

Portlaoise who were the underdogs on the day proved what a top class side they are as they pressured Kinsale from outset with early free throws from Jack Dooley quickly followed by a three pointer from Captain Evan Maher. Liam Campbell found space on many occasions allowing him to score three baskets in quick succession. Strong work inside from Dooley and Kyle Burke pressured Kinsale into making early fouls, leaving their 6ft 7 Neptune Super League star Mattie Rudak with only two points in the first quarter.

Second quarter was a tighter affair as both teams pressured on defence. Great work in offence from Portlaoise gave Maher an opportunity to drop two more three pointers and lift the team and its supporters. Further baskets from Rudak brought the game level but Mark Bartley’s persistent efforts quickly cancelled these scores out when he twice broke on a fast break and finished strongly to the basket. This left Portlaoise 28–23 up at half time.

The third quarter saw Kinsale get more into the game. Strong play driving to the basket from Maher saw him rewarded with two made free throws. Great rebounding from Alan Buckley saw Portlaoise get more opportunities but they were unfortunately unable to convert. Strong play at the end of the third quarter saw Dooley get another basket leaving Portlaoise behind 36-32.

In the last quarter, the Portlaoise supporters really lifted the team as Campbell and James Dunne made excellent baskets. Dooley and Burke continued to pressure Rudak, but Kinsale’s Jordan O’Connell began to find his range scoring eight points.

Portlaoise found themselves three points behind with only twelve seconds remaining. Good movement in offence left Maher open at the top of the key and he scored a remarkable three pointer to bring the game into overtime.

Overtime was a very tight affair as Rudak and O’Connell combined once again. Dunne showed his skill driving to the basket and also dropping his signature three pointer. Rudak equalised in the dying moments with a free throw to take the game into its second overtime.

Both teams began to tire but pride and determination kicked in as they tried to get the win they both deserved. Baskets from O’Connell left Portlaoise behind but strong work from Campbell and Dunne forced the game into yet another overtime.

Portlaoise’s foul trouble proved to be the changing point in the game as Rudak converted six free throws leaving Portlaoise four points behind. Another three pointer from Dunne left Portlaoise trailing by one point but unfortunately there was no time left on the clock. A devastating result for the Portlaoise team who left everything out on the court in a game where no team deserved to lose.