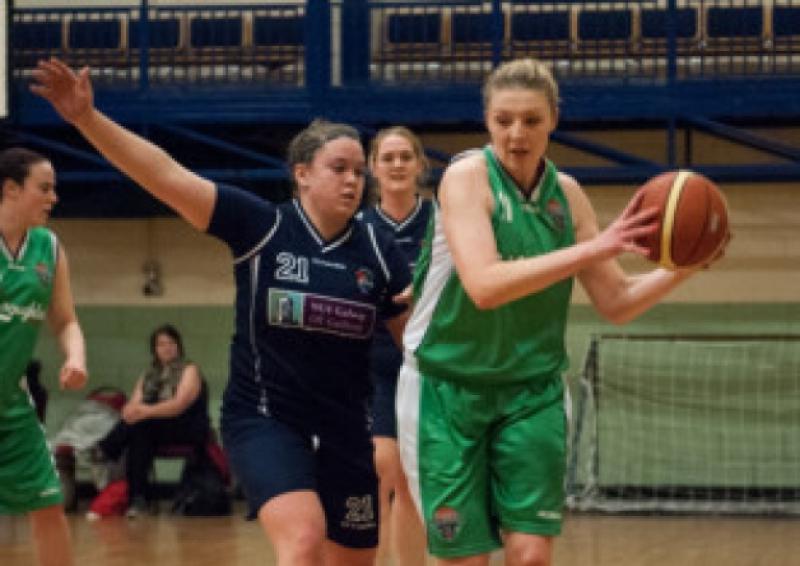 A near perfect first quarter performance was the cornerstone of their seven point victory as NUIG Mystics fought back from 19 points down in the first to push Portlaoise till the very end in front of another great home crowd.

The teams victory along with other results on Sunday in the league rubber stamped their position as regular season Champions and first seeds for the League Cup semi-finals with a home draw.

O’Loughlins Panthers knew the importance of winning the game and knew that a win for Mystics was a necessity in their chances of making the semi finals also. The home side came thundering out of the blocks and played some excuisite fast break basketball throughout the quarter.

The crowd were treated to some excellent play as Panthers broke out on the transition with relative ease and clinically finished every opportunity putting Mystics on the back foot straight away. O’Loughlins Panthers stormed into a nine point lead without reply with Nicola Farrell and Maeve O’Sullivan finishing strongly to the basket.

Mystics set up in a high three two zone to counter the three point threat of the Portlaoise guards but they left the corners free with Catherine O’Sullivan finding space to drain her first three of the game. Sinead Melia came to life and finished three fast breaks off at speed to continue her sides great start.

The intensity on the defensive end was as mind blowing as Mystics could only manage two scores in the first ten minutes. Panthers continued to add scores both inside through Farrell and outside with a buzzer three pointer from Sharon Regan. The home side took a well deserved nineteen point lead after the first quarter.

After such a great start it was expected that Portlaoise would see out the game with relative ease but this couldn’t have been further from reality as Mystics turned the tide to dominate the second quarter.

The final finish began to desert the Portlaoise ladies and the fast break option dried up with NUIG retreating at pace. Mystics were a lot more patient in their offensive play and began to pick gaps in the Portlaosie zone.

Mid range shots from Siobhan McGowan began to fall and Hannah Coen was beginning to find her range from beyond the three point line. This forced a change to man to man by the home side but this didn’t change their fortunes as Mystics continued to cut the gap right down before the half time whistle.

Frustration was beginning to creep in following some calls but the girls held their nerve to take a five point lead at the break following a second three from Catherine O’Sullivan. A big third quarter was required by the home team to change the momentum back in their favour.

The third quarter saw no change in tactics from the Mystics coach following the visitors excellent second quarter performance. On the other hand O’Loughlins Panthers changed back to their trusted zone defence with their intensity levels raised to those of the first quarter.

At times the home side were over aggressive with Mystics going to the line regularly throughout the quarter finishing a high percentage of their chances, Coen, Canavan and Mc Gowan the beneficiaries.

O’Loughlin Panthers fought back with some excellent mid range shooting from Sinead Melia while great inside play from Tracey Fallon, Nicola Farrell and Sinead Nihill saw all three add further scores keeping their side out in front. Portlaoise pushed further ahead at the end of the third with the lead standing at eight points with ten minutes left to play.

The home side were pushed hard throughout the final quarter with luck siding with the Panthers ladies with the big shots dropping when required. Mystics defence remained excellent for the final three quarters of the game and forced Panthers into the final seconds of shot clock on many occasions.

While running down the clock Portlaoise tore the heart out of Mystics hitting three shot clock buzzer three pointers in a row to keep them out of reach. The game was there for the taking at that time but a three pointer each from Maeve O’Sullivan, Sinead Melia and Sharon Regan holding their nerve followed by free throws from Melia and Fallon secured the win for O’Loughlins Panthers.

This win secured their position at the top of the table with one game to spare with Castleisland the only team going into this weekends round of games having the opportunity to draw level with Portlaoise. Results on Sunday went in Portlaoises favour and they now find themselves as number one seeds with a draw against the fourth place finisher which is yet to be decided.