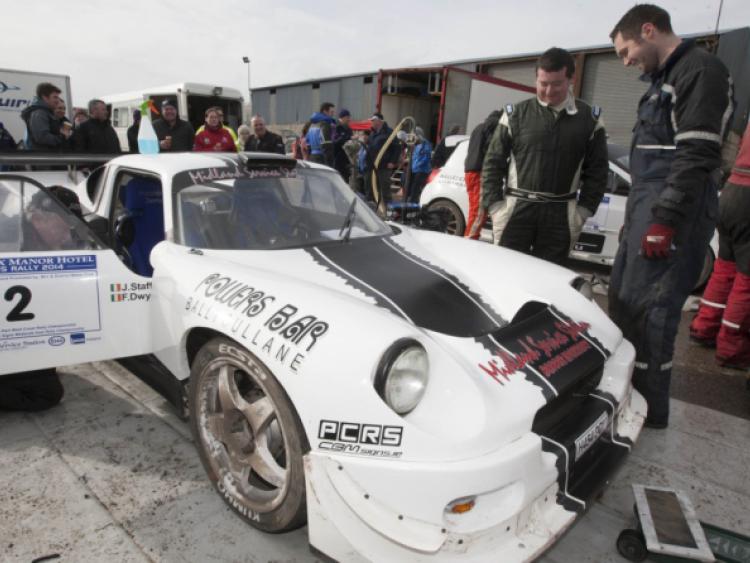 When the racing ended, it was the Welsh crew of Hugh Hunter and Andy Marchbank in a Subaru Imprezza who were the overall winners of the 2014 Abbeyleix Manor Hotel stages rally after a magnificent drive throughout the day. The pair battled hard with Wexford man James Strafford in the Darrion T90,and also the Subaru Imprezza of Paddy Mc Veigh.

This event was the first round of the Top Part West Coast and Loughran Signs.com Midlands East rally championships. Clerk of the course Bill Ryan and his team had put months of hard work into the organising of the event and it all paid off on the day.

Rally HQ and main event sponsors was the Abbeyleix Manor Hotel while Laois Tourism and Midland Service Station in Borris-in-Ossorry were co-sponsors for this eight stage event.

It was a damp start to the morning with the rain leaving surface water and mucky conditions on the first loop of stages. The event kicked off at 9.30am with a total 94 cars starting the first stage in Shanahoe.

Clonmel’s Roy White in his Rover MG S2000 was quickest through the first test. Other stages included Molloy’s Hill outside Borris-in-Ossory and Glendine Drive where rain made conditions more testing and it was a three horse race between James Stafford, Hugh Hunter and Paddy Mc Veigh with Daniel Barry in the Mitsubishi Evo10 leading group N in fourth and Ed Murphy in fifth.

It came down to the last stage and Stafford set another fastest time of the day, 17 seconds quicker than Hunter through, but Hunter still held onto clinch the win by an incredible fifty seconds.

The Historic category was won by Philip and Lynn Mc Kibbon in a Ford escort MK1 while Sean Brady and Pauric Murtagh in their Honda Civic dominated the Junior category all day by winning it by over three minutes.

The club would like to thank all the marshal’s who braved the conditions from early morning in assisting in the running of the event. One further group of people this event would not be possible without is the residents and landowners along the route. We thank them for their patience and co-operation, and also both Laois and Offaly county councils for their help. For more information please log onto www.Birrmotorclub.com or follow us on facebook.