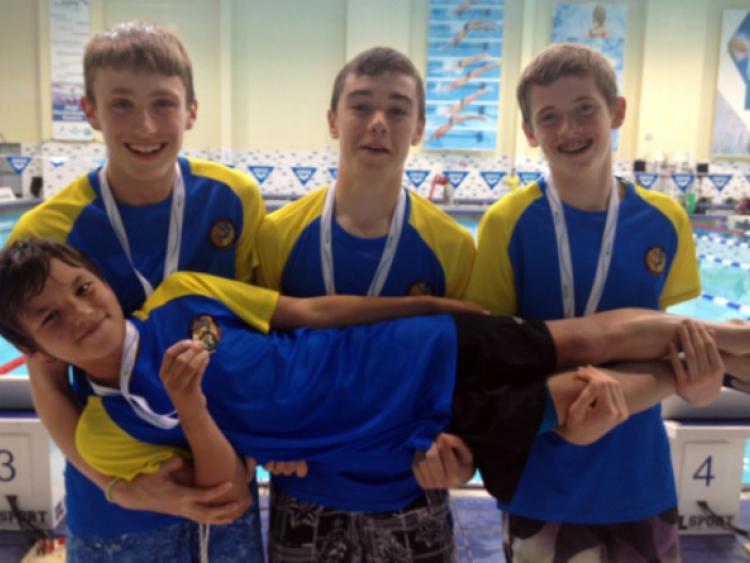 In swimming getting to a national final is a big deal. Conquering big-event nerves on the day is an even bigger deal. That’s exactly what ten terrific marlins did, and more, at the prestigious national event.

A win for the the U-15 Freestyle Relay team brought the meet to a fabulous finish, as Thomas Martin, Jack Rouget, Christopher Carew and Ryan Flynn ate up the water to finish well under two minutes, ahead of city teams from Limerick, Dublin and Cork.

This was a remarkable victory for the team made up of two fourteen-year olds (Thomas and Christopher), a thirteen-year old (Ryan), and Jack Rouget who had only recently turned twelve. This is the first ever All-Ireland Relay title for the four year old Portlaoise based swim club.

The Sunday evening victory was all the sweeter because their Friday evening win in the Medley Relay had been cruelly snatched away from them due to a 0.02 computer recorded early break.Medals also went to Christopher Carew and Mick Carroll who took bronze in 100 Breast.

It was 13-year-old Ryan Flynn, however, who completely stole the show. The talented teenager came out on top in all six of his individual events, shaving off an average of nine seconds in each one, outclassing every other swimmer in his age group. Because Ryan’s times exceeded the IAG Division 1 Championships standards by more than 2% he was presented with six Speeding Certificates instead of six gold medals.

It was also a gala of powerful performances for Thomas Martin. He secured a Division 1 QT in 100 Free, shaving three seconds off in the process. He recorded PBs in all his events- improving by six seconds in 200 IM and finishing 6th overall; shaving two seconds off 100 back coming 7th overall; shaving a further six seconds in 200 Free, while narrowly missing out on a place in the final. The straight final of the 200 Fly was a huge disappointment for Thomas as he was stripped of a hard won silver medal on a tiny technicality.

Christopher Carew also gained a Qualification Time for the Irish Age Group Division 1 Championships in 100 Breast, improving by three seconds and winning a bronze medal. He shaved off six seconds in 200 Breast, finishing 7th overall. He also improved by six seconds in the 200IM, narrowly missing out on a place in the final.

Mick Carroll also won bronze in the 100 Breast, missing out on a place at the IAG Divison 1s by three tenths of a second.

Ian Heffernan came 8th overall in the 100 Breast final, shaving of three seconds in the process.

Also in the 100 Breast Sinead Ni Chuinn recorded a strong PB, as did Tyler Dolan who came 9th overall. The youngest Laois Marlin Toni Dolan, age 10, shaved two seconds off in the 200 Breast and came 11th overall, in her first ever IAG National Final.

There was a fabulous atmosphere at UL with a great sense of occasion throughout the three-day event. Former Olympian Melanie Nocher did a great job as commentator, constantly encouraging spectator participation. She was very generous with her time chatting to swimmers, posing for photographs and signing autographs for her many Laois fans.

It was a great start to Derek Flynn’s tenure as the new Chairman. He congratulated competitors on “a truly great weekend of swimming”.

“It was a pleasure to be present at the national division 2 age group finals along with ten Laois Marlins and their families to witness first hand the brilliant performances in the UL pool over three days of very tough competition,” he said.

“All ten swimmers should be very proud of how they swam,” he continued. “To win a first national relay title for the club was fantastic.”