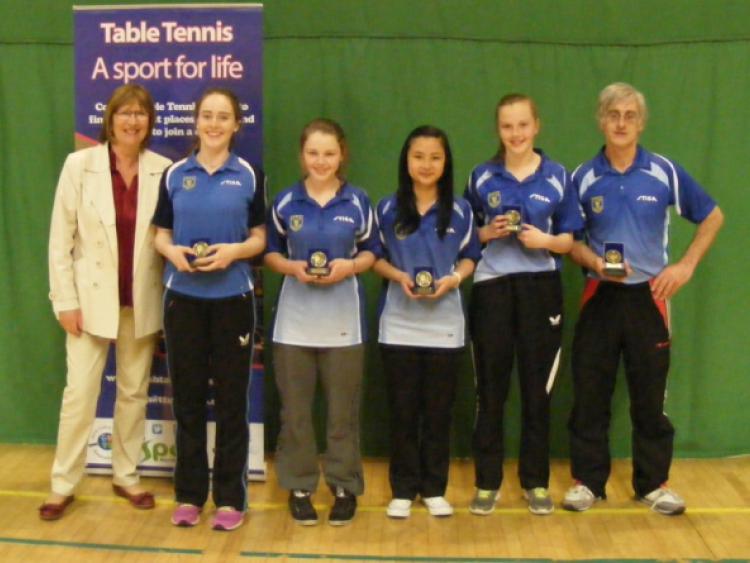 An exciting week of table tennis locally and nationally provided a sweet smell of success for a number of local players.

An exciting week of table tennis locally and nationally provided a sweet smell of success for a number of local players.

Lisburn in Antrim hosted this seasons inter-provincials where Leinster again excelled in taking four of the six events.Six key players from Mountrath TTC were among the team who collected the Victor Barna shield for the fifth year in a row.

Kate Whelan and Leanne Delaney teamed up with Dublin girls Katie McClone and Nga Nguyen as the four 13 year old sensations and their team coach Jimmy Hayes dominated U-15 girls event, dropping only one game out of twenty four played.

However, the scoreline does not reflect the close competition that existed in the many games they played as Ulster and Connaught with strong teams faught hard to make progress.

Dylan Grace was also in fine form with the Leinster U-15 boys, as he and Evan McGovern led their team to gold with great consistency and good support from team mates Gallagher and Mullalley.

Jessie Hayes led the way in U-13 girls as she and her team mates Ciara O’Toole, Mia Egan and Sophie Kenny also took gold on the day following many close battles. Leinster took their fourth gold at U-18 boys with victory in the final set of the day on Saturday evening. Many other fine performances were achieved by Paddy Vaughan, who led the way in a very young U-13 boys team.

At U-18 girls, Amylou Hayes was appearing for her seventh year in a row in Leinster teams where she was in superb form, however a very strong Ulster team were always in control and duly collected gold. Next season this great annual event moves to Killarney where the four areas will again set out their teams to battle it out for provincial glory.

Starball Table Tennis completed their Senior League season recently with the Starball Open, which was staged in Trumera Community Centre. Many excellent competitors with a spring in their step gathered to capture this demanding event.

After many rounds it was the young wizards Jestin and Grace who were the most brave, persistent and creative that reached a stunning final.The two young U-14 boys had brushed aside players of all ages to take centre stage.Scott Jestin and Dylan Grace provided amazing skill, tactics and speed in an effort to gain control.

Following a nail biting encounter it was Jestin who sealed the occasion and captured the event on a 3-1 scoreline. Starball League champions for the 2013/14 season were Athlone in the Premier Division with Mountrath second.

Division 1 winners were Portlaoise with a one point difference over Rathdowney in what was a great, season-long battle.