Excitement building ahead of Abbeyleix Rally 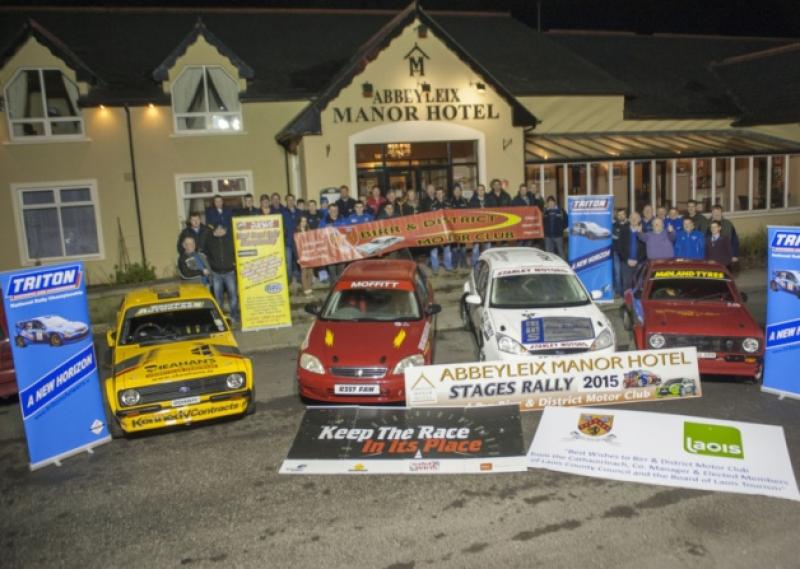 The launch took place at the Abbeyleix Manor Hotel, where a crowd of about 50 people had gathered. There was a small display of rally cars on show outside the hotel and photographs were taken with sponsors, and the three different rally championship representatives and the organising committee.

Once again this year Clerk of the course Bill Ryan and his team from the Birr and District Motor Club are the event organisers. This will be the clubs fifth consecutive year in a row running their biggest event of the year out of Abbeyleix.

The club would like to extend a special thank you to the Abbeyleix Manor Hotel who are the main event sponsors, along with co sponsors Laois Tourism and Midland Service Station Borris in ossorry, and also to all sponsors and programme advertiser as this event would not be possible without all your generosity and contribution.

Events like this cannot be run without the help and support of so many people especially the residents, landowners and the local people along the rally route and we thank them for their patience and cooperation each year.

The rally takes place on Sunday 22nd of February which is two weeks away now. It will be the opening round of the Triton Showers National rally championship and also the Top Part West Coast and Loughran Signs Midlands East rally championships.

One hundred and forty entries have so far been received and the closing date for entries is this coming Wednesday the 11th of February.

Seeding will take place on Thursday night with a full seeded entry list due for release on Friday night. The final press relese for this event will also be issued next weekend. For more information and to keep upto date with the Birr Motorclub you can follow our activity by logging onto www.Birrmotorclub.com or www.facebook/birrmotorclub or follow us on twitter @Birrstagesrally.