U-14 boys wrap up undefeated season 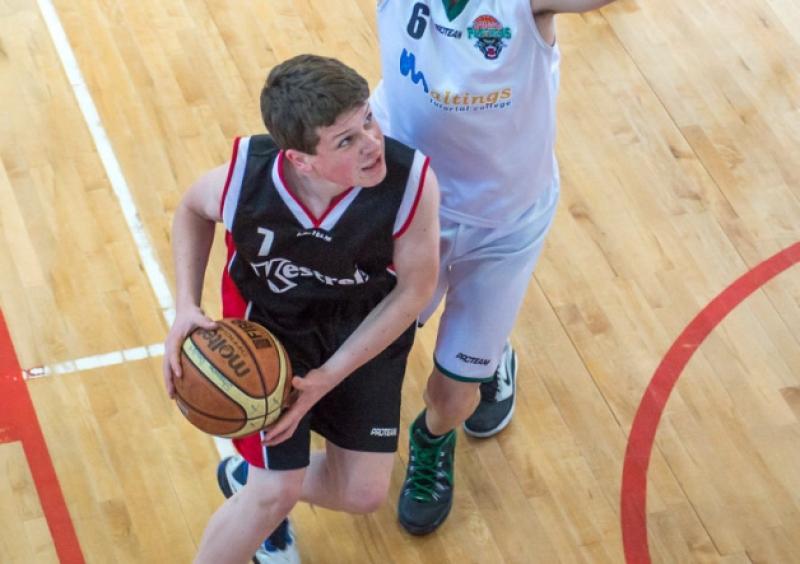 Portlaoise come out on top in what was a very exciting game of basketball, and with this win Portlaoise claimed all possible titles and went undefeated for the season.

Portlaoise come out on top in what was a very exciting game of basketball, and with this win Portlaoise claimed all possible titles and went undefeated for the season.

Portlaoise came flying out of the blocks with co-captains Trevor Swayne and Rian O’Connell linking up well for a couple of baskets. Dylan Phelan was causing numerous threats to the Kestrels defence with his ability to shoot and to drive, he managed convert some of these chances to extend the Panthers lead.

Colm Byrne showed his passing ability feeding O Connell for the easy lay-up. Darren Moore had an excellent showing on defence causing turnovers, leading to some fast break baskets for the Panthers. Kestrels were not going to let the Panthers run away with this game and got a couple of scores to finish the opening quarter.

Kestrels came out with more aggression in the second quarter with Cormac Maughan and Ned Ryan using their size to good effect. Stephen McCabe and Pierce Bolger Hinds did a super job on the defensive end fighting for any rebounds that came their way.

Ben O’Reilly worked tirelessly fighting for any loose ball and he picked up numerous steals, one leading to a fast break basket for James Phelan. Gary Morrissey showed his ball handling ability weaving his way through the Kestrels defence for an excellent score. Kestrels dominated the second quarter of this game closing the gap between the sides. Portlaoise went into the half leading by five.

In what was a back and forth game in the third quarter with both teams trading baskets, it was the returning Mark Vessey who kept the scoreboard ticking over for the Panthers while Ned Ryan kept his team within touching distance. The gap between the team was then cancelled in the last few seconds of the quarter; both teams were tied at twenty-eight points.

The fourth quarter belonged to Portlaoise. They came out with fire inside them, Swayne and Dylan Phelan fired in numerous three pointers in a row. Morrissey got out on the fast break and was found by Swayne and with this basket they moved into a double digit lead.

Then it was O’Connell and Vesey with some nice post moves to extend the lead to twenty. Portlaoise ended up winning the match by eighteen points, but at certain stages Kestrels looked to have the All-Ireland champions on the ropes. But in the end it was the Panthers who claimed the Top Four title.

It really has been an amazing season for this group of lads, winning every possible title and going undefeated. Well done to the lads for their amazing season.