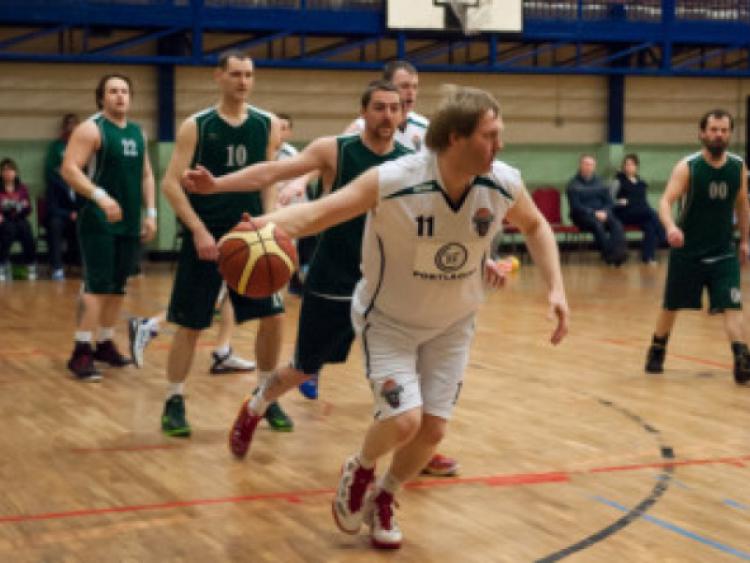 O’Loughlins Panthers men’s team played host to Team Litpol of Birr on Sunday night in the Mens Midlands League Division 1 in a must win game for the Portlaoise team.

O’Loughlins Panthers men’s team played host to Team Litpol of Birr on Sunday night in the Mens Midlands League Division 1 in a must win game for the Portlaoise team.

After winning the treble last season Portlaoise have found the going tough with the absence of key players in important matches. Litpol have struggled in their first year in the league and this was a big game for the home side to turn around their fortunes with close losses of late.

An excellent team performance in the second half secured a massive twenty seven point home win that O’Loughlins Panthers hope will boost their Top4 chances.

Portlaoise got off to a shaky start playing in their usual zone defence. Litpol punished the lazy defence straight away with three big three pointers in the first five minutes of the game.

The Panthers men worked hard in offence and kept the visitors lead down to a minimum early on. With Litpol hitting big shots outside, it forced Portlaoise into changing the defence to a tighter man to man and this worked to their advantage straight away as Peter O’Sullivan and Gary Donnelly got out on the break following Litpol turnovers. Our very own Lithuanian Gedas Simkus was lighting up the hall early on with two big three pointers from the corner to give O’Loughlins Panthers the lead for the first time after eight minutes of the game.

A three point play from Donnelly and a basket under the boards from Greg Dunne extended the Portlaoise lead out to six points at the end of the first quarter.

The second quarter was a very scrappy affair with both sides mounting up the turnovers. Offences came and went without any scores and the game was turning into a dog fight. With neither side able to convert their set plays it was on the break where scores were coming from.

Peter Duignan and Gary Donnelly were running the floor at pace with both converting a pair of baskets each which were their sides only scores of the quarter. Portlaoise held their six point lead at the break as Litpol weren’t able to capitalise on the home sides turnovers.

The third quarter saw the home side turn in their best ten minutes of the game. With Litpol’s main player sitting out the majority of the quarter due to foul trouble, Portlaoise quickly looked to work the ball inside on offence.

Also excellent penetrating moves from the outside by David Keane and Gary Donnelly saw Portlaoise increase their lead out to double digits. The home side began to work their bench efficiently introducing fresh legs and working the visitors extremely hard in their defence.

With Litpol focussing on keeping the Dunne brothers quiet under the board, Greg Dunne changed his point of attack by coming outside to drain two big three pointers followed by two more long range shots from Shane Maughan. O’Loughlins Panthers were dominating the game by the end of the third and finished the quarter with a nineteen point lead.

The final quarter saw the introduction of Shane O’Neill and Donal Dunne and it didnt take either of them too long to get their names on the scoresheet. O’Neill converted on the break while Donal Dunne converted two baskets inside the key. The three Dunne brothers combined for thirteen of the final quarter fifteen points for the winners.

O’Loughlins Panthers will be extremely happy with the convincing win and will now look forward to next Sundays home game against Tullamore.