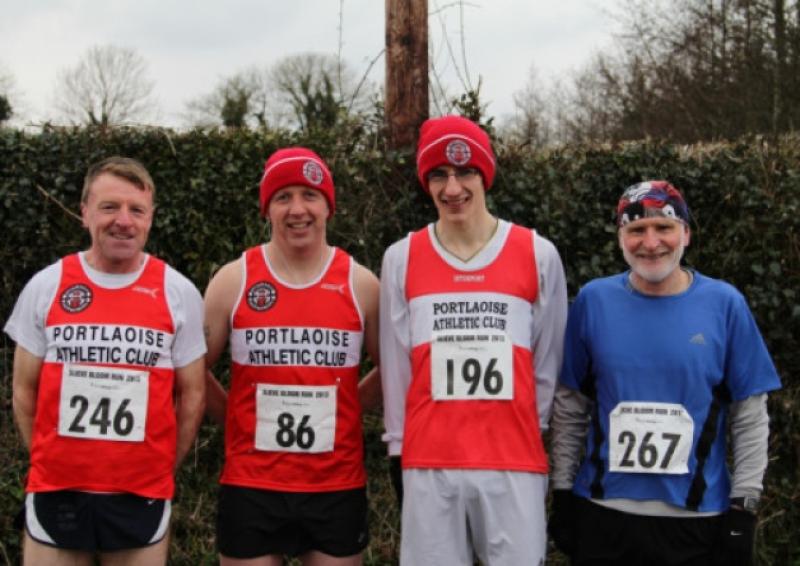 Easter Sunday’s hard driving wind didn’t deter nearly 250 hardy souls from lining up at the foot of the Slieve Blooms for the start of the Slieve Bloom Run 2013. Now in its second year, this event is proving to appeal to those who like a challenging but scenic course. There were several familiar faces from last year and they came from all corners of Ireland and much further afield. Some lads made the long journey up from Cork on the morning of the race and with the clocks going forward this made the day for the sleep-deprived lads a long one.

Easter Sunday’s hard driving wind didn’t deter nearly 250 hardy souls from lining up at the foot of the Slieve Blooms for the start of the Slieve Bloom Run 2013. Now in its second year, this event is proving to appeal to those who like a challenging but scenic course. There were several familiar faces from last year and they came from all corners of Ireland and much further afield. Some lads made the long journey up from Cork on the morning of the race and with the clocks going forward this made the day for the sleep-deprived lads a long one.

There were competitors present from several other nations, including three couples from the USA. One couple from America was visiting Ireland for the first time and made the slightly shorter journey from their stopover in Dublin to check out the Slieve Blooms. On this occasion they arrived just after the start as it was later discovered they decided to experience the Irish social scene until the early hours the previous night, this caused them to forget that the clocks went forward an hour; hence the late arrival, but both soon rejoined the pack and ran very well.

With an increase in numbers from last year’s event, both the 10k and half marathon competitors huddled together at the start to shelter from the bitter cold wind, before they got on their way to tackle the challenging course that lay ahead. From the start both events remained together for approximately half a kilometre before the 10k runners turned right to take in the undulating ‘Ricketts Rock’ route. The half marathon runners took on the more gradual but consistent climb up towards Glendineoregan before they meandered around the forest tracks to rejoin the 10k route.

In the 10k it was Birr man Ray Flanagan who led the field home but hot on his heels was a battle for second place between Ciaran Keenan of Ballyfin and Trevor McCormack of Portlaoise. The seasoned and well-experienced Flanagan crossed the line first in a time of 37.29 but in the tussle just behind it was the Portlaoise man who bided his time and proved he had a little more in the tank than the Ballyfin man as he moved into second place whilst passing through the village of Clonaslee finishing second (37.41). He finished just ahead of Keenan of Ballyfin AC who was third in a time of 37.49

In the women’s race it was the in-form Grace McConnell, last year’s winner from Ballyroan Abbeyleix & District who added to recent victories and finished 7th overall. Despite taking a slight deviation, she stormed home in a time of 43.06 to win the ladies race. Behind McConnell was Marie Fitzgibbon of Thurles Crokes, finishing in a time of 43.49 and shortly after, it was the Raheny Shamrock girl who took third spot in a time of 44.46.

There is no running club in the village of Clonaslee, but with the recent upsurge in people running it was great to see a number of the Clonaslee locals and those from the surrounding areas taking on the challenge.

The half marathon proved to be very competitive this year with last year’s winner Aengus Burke only managing to finish 5th place.However, it was the young whipper-snapper,Tom Lupton of Portlaoise who showed a clean pair of heels to the rest of the field to romp home in a time of 80.49 Next in, in second place was George Brady of Donore Harriers (82.27) and close behind in third was John Dillon of Mullingar (82.48)

The competition in the women’s half marathon was a very close affair between the top three and with only seconds to separate them it was Teresa Agar St Abbans  who finished in a time of 94.01 and  displayed strength and determination to hold off the challenge from  Marie Byrne of Dublin (94.05), securing the third spot prize was Ruth Kelly Sportsworld AC (95.24)

The rest of the field trickled in over the next couple of hours with some looking tired, some relieved and the rest just satisfied with their achievement of completing the course. To help all refuel there was the welcome sight of soup, sandwiches, cakes and hot drinks waiting for all finishers inside the community centre.

During this time the prize giving was also taking place in the centre with trophies and cash prizes being awarded to the top three male and female finishers in both distances, as well as prizes going to first over 40 and 50 male and female finishers.  For those who didn’t receive a prize there were lots of chocolate bunny spot prizes handed out. Nobody went away empty handed as all who ran the event received a much sought after ‘I’m Bloomin’ fit’ technical t-shirt.

There was lots of positive feedback after the event and credit must go to the local marshals and helpers as well as all the members of Ballyroan Abbeyleix & District AC who helped to ensure all went well on the day. Full results and photos can be viewed onwww.runalong.net