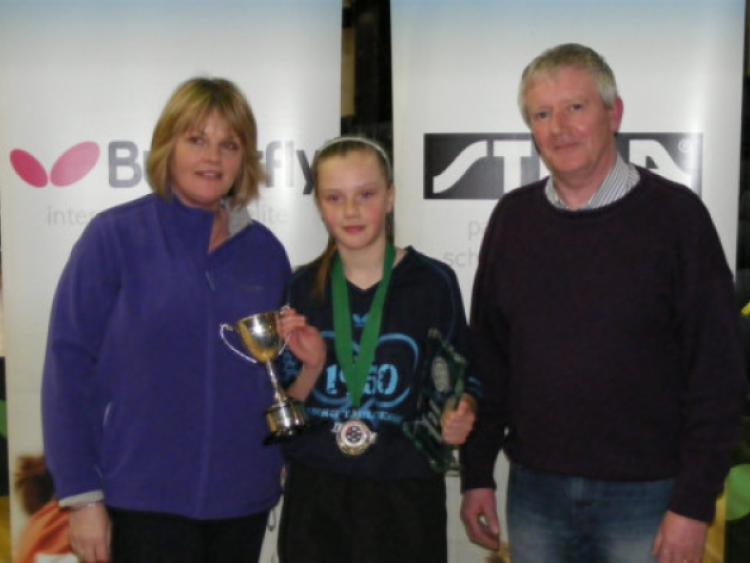 Kate Whelan added another title to her already glittering collection when she became International primary school champion for the second year running.

Kate Whelan added another title to her already glittering collection when she became International primary school champion for the second year running.

The previous Friday she had teamed up with Jessie Hayes, Marie Williams and Ciara O’Toole as team Ireland and by Saturday evening they were collecting gold following blistering victories over Scotland, Wales, Isle Of Man,Gurnsey, Jersey and England.

Irelands Boy’s had also been performing to a supreme standard with Tadhg Downey and team mates Ethan Duffy, Eoin Cathcart and Ghenadie Isac all in scorching form right up to the final showdown with England in which their opponents had massive strength and balance in store to perform at an amazing level that was just that bit too much for Tadhg and his team to get control over and so they had their only loss of the event and had to settle for silver after a brave performance.

The Sunday programme saw Ireland represented in the Girls singles event by the Irish team along with Leanne Delaney and Tiegan O’Connor who were stepping up to the plate to represent Ireland for their first event while the Irish Boy’s team were joined by Paddy Vaughan in the Boys event.  While International table tennis was at full speed in the Arena in Tallaght, there was also a major Leinster event in Clontalf which also was providing rich pickings for many players from Mountrath table tennis club.

Dylan Grace was cruising through the U-12 event in which he would meet club-mate Paddy Vaughan in the final. Paddy, who is also a para player, gave a very good challenge before Dylan’s pace and speed became a deciding factor. However Paddy has become a very fine young table tennis player who went on to represent Ireland on Sunday and is sure to make an impact in time on the International para games.

The U-12 girls were short of Jessie Hayes, Ciara O’Toole and Mia Egan who were on Irish duty but still had much competitive action with Nadia Krawczun taking gold while Amylou Hayes was capturing U17.

Scott Jestin was in the thick of extreme action at U-14 where competition is strong but he continues to reach the high level which saw him reach semi-final stage before losing out to eventual winner Evan McGovern. Dylan Grace was also knocking on the door of this level and reached 5th place.

While the weekend had International and Provincial events Mountrath also had a date with Community Games in Longford. However due to the fact that three of the players Hayes, Delaney and O’Connor were were on duty for Ireland they had to unfortunately withdraw from the event in which they were All Ireland champions in 2012.