More silverware for U-12 boys in Kilkenny 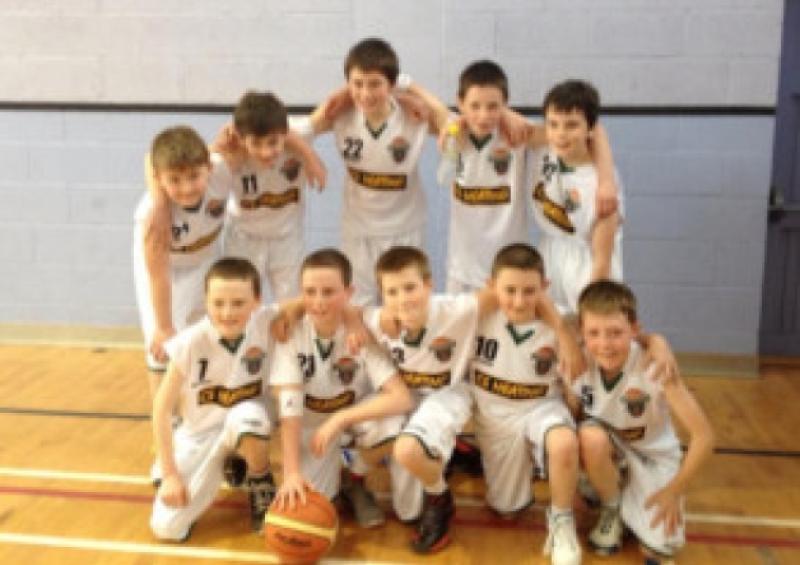 The Portlaoise boy’s U-12 basketball team travelled to play Kilkenny Stars in the Kilkenny Area Board Cup Final.

Kilkenny started the better with early baskets from Rory Mc Carthy and Matthew Karaski. Portlaoise came strong into the game with good movement of the ball and fine shooting from Colm Byrne and their ball handler Ben O Reilly.

As the quarter went on Portlaoise had good performances from Eddie Critchley and Stephen Mc Cabe. Portlaoise kept the scoreboard ticking over with Colm Byrne getting eight points to see the teams level.

The second quarter saw Portlaoise for the first time begin to dominate with baskets from James Phelan and their big man Rian O Connell. Kilkenny kept their challenge alive with good scores from Rory Mc Carthy and Cormac Rafter.

As the halftime whistle approached Portlaoise edged out in front with scores from James Phelan and their Captain Dylan Phelan to help his team to a three point lead, 22 points to 19 points.

Portlaoise came into this game as clear favourites having remained unbeaten to win the League Title but Kilkenny raised their game and were rewarded with some fine scores.

Portlaoise seemed to lose concentration and for the first time a shock looked on the cards as Kilkenny went into a six point lead. Following a time out Portlaoise regrouped and a couple of vital baskets from Colm Byrne and Darren Moore brought them right back into the game. Kilkenny still held a two point lead at the end of the quarter despite good work from Ben O Reilly and James Connolly.

The last quarter had everything a Cup Final should, excitement, passion, drama and no little skill from two well-organised teams. Portlaoise seemed to find a new gear that saw Dylan Phelan and James Phelan put points on the scoreboard.

As the game went on Portlaoise took control with Rian O Connell getting three unanswered baskets to open up a significant eight point lead. Kilkenny to their credit battled right to the end but Portlaoise were now in full flow.

With baskets from Ben O’Reilly and it seemed appropriate that James Phelan got the last score of the game to bring his total to an excellent twelve points to help his team to the Kilkenny Area Board League and Cup double.