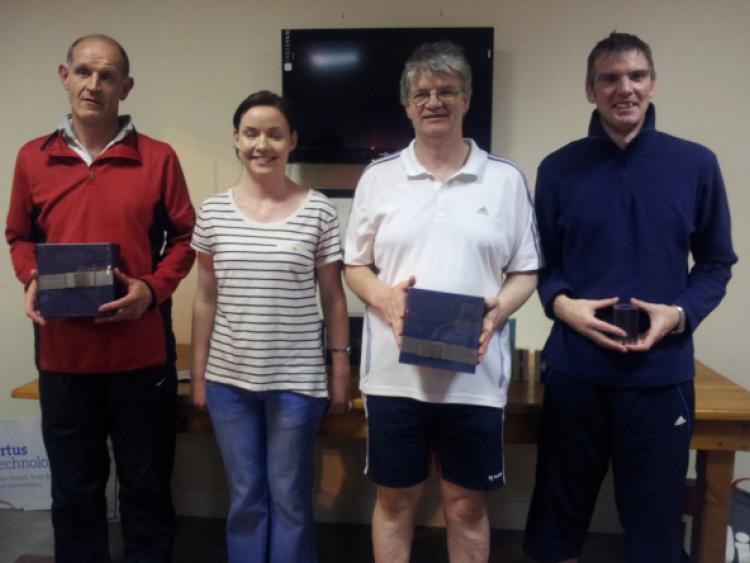 Abbeyleix Tennis Club hosted a very successful Club Doubles competition over the months of May and June.

Abbeyleix Tennis Club hosted a very successful Club Doubles competition over the months of May and June.

The tournament was sponsored by O’Donnells Pharmacy, Abbeyleix and involved over 50 players.

The Finals took place on Tuesday 5th June and some exceptional tennis was played. In the A ladies section Mary Daly and Deirdre Fingleton got the better of Gemma Ogilvie and Claire Mc Cormack in two sets. In the men’s A section Ernie Donovan and David Brophy came back to beat Kevin Bergin and Eamonn Carroll 2-1 after losing the first set tie break.

The B ladies finals was a lengthy battle with Breda Keating and Pat Fogarty getting the better of Siobhan Kirk and Michelle Fitzpatrick after three sets, two of which were tie breaks, and over three long hard fought hours on court.

Michael Rafter and Clive Condell won out the B section after defeating Terry Carroll and Brendan Crawford in two sets.

Thanks to all who came down and supported the finals and many thanks to our sponsors in O’Donnell’s Pharmacy. Our next club competition is the singles which will run over June and July. Keep an eye on our website and on our Facebook page for more details.

Meanwhile the Saturday morning programme for kids got off to a great start at the weekend with over 70 kids in attendance. With a mixture of fun games and professional coaching from coach Michael Donnaghy, there was something for everyone to enjoy.

The programme is open for all primary school children and will run for the next 11 Saturdays in three hour-long sessions from 10-1. If you wish to join in you can come to the clubhouse next Saturday morning and sign up.