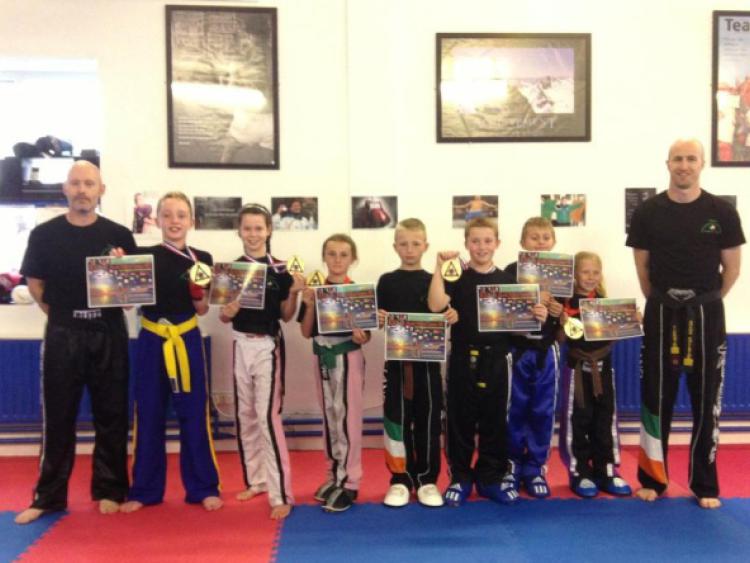 The Mountmellick based Laois Martial Arts Club Kickboxers were among the stars of the show at the WOMMA World Championships held recently in Citywest, Dublin.

The Mountmellick based Laois Martial Arts Club Kickboxers were among the stars of the show at the WOMMA World Championships held recently in Citywest, Dublin.

Team LMA had a team of 10 fighters competing on the day and they came away with an impressive haul of six medals.

This was the first time the event was held in Ireland. Team LMA coach Shane Culleton, said all of his junior and senior fighters competing were very excited to get the opportunity to compete at such a good event.

First in action for the club was National Champion Chloe Culleton, who to her delight retained her U-11 years -40kg World title, which she had won the previous year in England.

Next in line was current U-10 National Champion Byron McGuirk who won a bronze in this event last year. Byron fought very hard on the day but was unlucky to lose. A great performance was put on by the young star.

Next to take to the mats were two of the club’s junior black belts, JP Daly and Peter Dunne. Both of these kids put on super performances on the mats. JP lost his match to a more experienced opponent. Peter, after two hard fights, came away with a bronze medal. Coach Shane Culleton remarked that the guys had fought with so much heart and gave it their all.

The dynamic combination that is the McInerney sisters, Nicole and Joeleen, were once again triumphant on the day. Both of these young athletes came away with gold medals in the U9 and U-12 category.

Next to take top spot on the day was Matthew McGinley and he took good in the U-11 Beginners.

Last of the juniors was the club’s youngest fighter, Martine Daly. Just eight years old, Martine fought a tough fight which went to extra time. Martine however was the fitter and more accurate fighter in the last 30 seconds which ultimately decided the top spot.

Final fighter of the day for the team was Senior Emmett Lawlor. This was Emmet’s third outing on the mats. He fought a very good and experienced English opponent. Emmett didn’t take any medals this time round but the experience alone will be a great advantage to this up and coming fighter.

Coach Shane Culleton said that he was very proud of all his athletes.

“They put in so much hard work and dedication. It was, as always, an honour to be able to watch them compete at this level and to see them improving all the time. To take medals along the way was a bonus and reward for all their hard work in preparing for this competition.” Laois Martial Arts would like to than: the club committee for all their hard work, the coaches, the parents and guardians and the community of Mountmellick for their continued support. Also a huge thank you was extended to main sponsor BuyTrophies.ie. For details on kickboxing in Laois contact 087 2768843