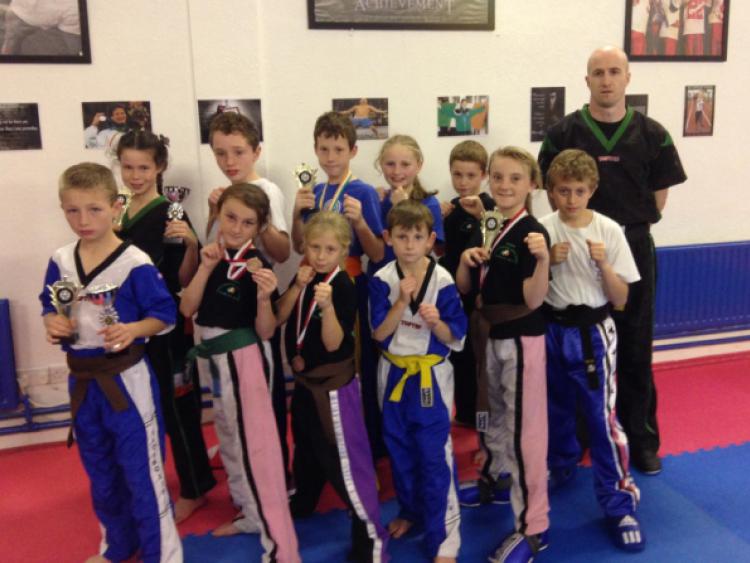 The last six weeks have been busy for Laois Martial Arts fighters again as they continue to take the top spots in various competitions are the country.

The last six weeks have been busy for Laois Martial Arts fighters again as they continue to take the top spots in various competitions are the country.

The club has had huge success this year after winning National and World titles in the first six months alone. The club was first in action in The Tallaght Open on September 1. A total of ten travelled on this occasion.

The club had some great fights on the day and came away with four third place finishes. These places on the day went to Ryan Coss (U-11 Beginner), Byron Sage (U-11 Advanced), Chloe Culleton (U-10 Advanced) and Nicole McInerney (U-11 Intermediate)

The next adventure for the club was The Rumble in Tallaght on October 6. This saw a team of 17 fighters in total compete. Coach Shane Culleton commented, “I’ve never seen so many junior fighters competing in one arena. It was amazing to watch and indeed to be part of. This was the biggest team I’ve ever had competing at any single event. All of the fighters done well on the day. The competition was very strong and it was a super day for the club. The fighters showed great heart on the mats and done the club proud.

The club came away with eight top spots on the day. The McInerney sisters, Nicole and Joeleen, were first to come away with medals, earning third places in their respective categories. Next to take another third place was senior fighter Shane Evans (-85kg Beginner). Two more bronze medals were won by Matthew McGinley and Ryan Coss, both competing in the U-11 Beginner section. The rest of the top places were taken by Chloe Culleton (U-10 Advanced Rumble Champion), Byron McGuirk (U-10 Advanced) Rumble Champion) and our youngest advanced fighter Martine Daly at just eight years old who won third place (U-10 Advanced).

The Laois Martial Arts Committee would like to thank all of the parents, coaches in particular Shane Culleton and Thomas Dunne for their constant dedication to the club and all the members who continue to support the club and make it as successful as it has been over the past twelve months.

A huge thank you to our main sponsor Molony’s Gaelic Bar for their continued support. For details on Kickboxing and Self Defense in Co. Laois contact 086 3399287 or find us on facebook.