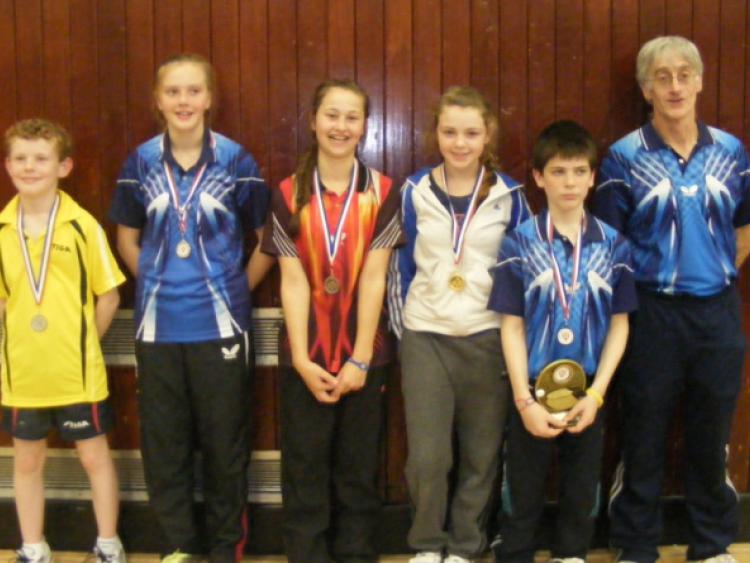 Carrying on the form she produced in Belfast recently at Round 2 of the All Ireland, series Kate Whelan’s international achievements continue to grow as she produced another spectacular round of games at the Stockton Open in England.

Victories over many UK players, including English Number 1 Emily Bolton, took her to a semi-final stage before losing out to the eventual winner. At the U-18 age level, 13 year old Kate also produced a sizzling display where she also reached the semi-final stage before she narrowly lost out to English international Lucy Elliot on a 2-3 scoreline.

Whelan also teamed up with Kerry O’Mahony to win their team event making is a most successful weekend for the Ballyroan girl.

Pocket rocket Dylan Grace who moves like a butterfly at the table also produced an eventful display in Stockton where boys competition was at an extremely high level with many who train on a twice daily schedule for months before these events. Despite this awesome standard, Dylan performed superbly to take many notable results before succumbing to one of uk’s leading players A week earlier Kate and Dylan along with Amylou and Jessie Hayes, Scott and Amy Jestin, Leanne Delaney, Paddy Vaughan, Claire Handcock, Richard Thompson, Tiegan and Sarah O’Connor were part of a 12 strong Mountrath club group of players who were competing in Belfast’s Valley Leisure Centre for Ulster Open honours.

National U-13 champion for past two years, Kate Whelan has moved to U-15 where she continues to shine and gave an impressive display without dropping a game before the final where she met Ulsters leading cadet lady Rebecca Finn. Finn was in immaculate form from serious training for this event and that gave her the cutting edge to take a close but deserving 3-1 win.

In this same event Claire Handcock had her greatest national event to date as she liftes her game to a new heights with a very impressive 6th position in Ireland followed by Jessie Hayes in 7th while Leanne Delaney, who was unlucky to loose out in the earlier rounds, went on to easily win Division 2 with Sarah O’Connor making steady progress in the division. At U-13, Jessie Hayes and Paddy Vaughan were Leinster’s leading players as they both took third place in girls and boys events following many tough battles throughout the day.

For Tiegan O’Connor this is her first season U-13 after moving on from U-11 and she continues to progress at a good pace and she must be in with a reasonable shout of a place in the Irish Primary Schools team next April if her progress continues.

The U-15 Boys was a hive of excitement with a very strong contingent of players where at least 20 are of an extremely high standard. Here Dylan Grace took 7th and Scott Jestin 8th, however both boys are capable of a greater finish and will have their sights set for the next round in Killarney in January.

New kids on the block Richard Thompson and Amy Jestin are carving their way through the U-11 events with considerable progress with Thompson collecting his first national silverware being second in Division 2. For these two young players their commitment is immense to emulate the success of the clubs leading players. Paddy Vaughan took third at U-13 also went on to win U-17 disability event where he cruised to victory over his many opponents. Local competition within the midlands will include a round of the ITTA Challenger series on Saturday, November 23 in Trumera Community Hall. This will have a number of divisions according to ability for players 7-17 from the midlands.

Next Leinster ranking event is November 17, while there will be a national league for club teams of all standards in Roadstone on Decembe 1.