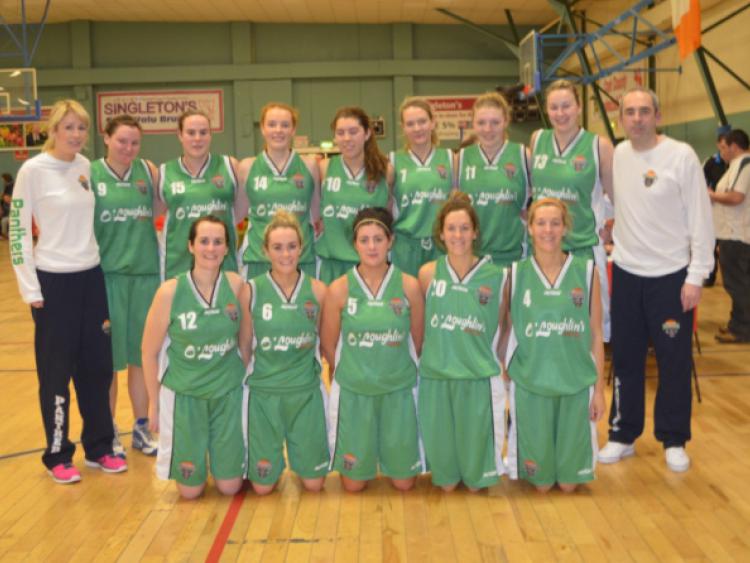 This is a massive achievement for the club and region as a whole and gives basketball a much needed boost in the town. This fantastic nineteen point win now gives the girls the opportunity to play in the National Basketball Arena in Tallaght over the weekend of 24th-26th January in the National Cup Final.

Portlaoise knew they would need to perform at the level they have been to date this season and it was their first quarter performance that proved the difference between the two sides in the end.

It was clear from the warm-up that the Portlaoise ladies were fully concentrated on the task in hand and from the tip-off the team were determined on getting ahead and building a lead early.

Coach Peter O’Sullivan couldn’t have dreamed for a better first quarter as Portlaoise were lethal in offence, scoring an amazing 33 points while only conceeding eleven at the other end. Fr Mathews sat back in a zone defence to start the game and this played right into Portlaoise’s hands as clinical shooting from beyond the arc from point guard Maeve O’Sullivan saw her bank her teams first eight points with two three pointers and a lay-up on the break.

This settled the girls down and they continued to pile on the pressure as they broke out in numbers with Sinead Melia and Catherine O’Sullivan finishing strongly to the hoop. While the first eighteen points came from the guards, the work of the inside players didn’t go unnoticed with Tracey Fallon and Nicola Farrell working tirelessly both ends of the floor in the paint.

The onslaught of scoring continued throughout the quarter with another two three pointers, one each from Catherine O’Sullivan and Sinead Melia. Panthers introduced fresh legs inside and both Sinead Nihill and Sharon Melia finished off the scoring in the quarter to give Portlaoise a twenty two point lead on a scoreline of 33-11.

After playing a top quality first quarter Portlaoise were expected to push on and dominate the game throughout but a combination of better defence from the opposition and poor finishing by the Panthers ladies saw them struggle to further extend their lead.

The game was quickly turning into a battle of the defences as scores were few and far between with both teams only managing to score six points apiece in the second quarter. The switch to man to man by Fr Mathews turned out to be a great decision as it closed down the shooting threat and forced Portlaoise to take the game inside.

The Panthers ladies became slightly frustrated as their great offensive play was not being rewarded with scores due to poor finishing. The one positive at half time was that Portlaoise were still in total control on the defensive end with Fr Matthews finding it impossible to penetrate into the paint or find their range from outside.

Catherine O’Sullivan was Portlaoise’s only scorer in the quarter hitting two big three pointers to make sure their first quarter lead remained intact.

The third quarter was by far the worst for the midlanders as Fr Mathews took five points off the Portlaoise lead. Once again they were struggling to convert under the increased pressure of the Fr Mathews defence and this is something that the team will need to work on ahead of the match up with Tralee in two weeks time.

Five points in the quarter is a worrying return and will be severely punished against better opposition in the future. But again the reason behind Portlaoise maintaining their advantage was due to their massive effort on the defensive end.

Walsh and O’Leary were the only two that were making inroads in Mathews offensive play accounting for majority of their sides scores throughout but scores were not easy come by. Portlaoise were finding it hard to free up their shooters and looked inside to Tracey Fallon for their scores. Panthers took a seventeen point lead into the final quarter which they never looked like relinquishing.

With so many experienced players in their ranks and with a total of nine players getting into the game in the final quarter it was clear that the fresh legs and maturity in personnel would work in Portlaoise’s favour.

Tracey Fallon and Sinead Melia contnued to score on the break with Melia also getting a further score followng an excellent penetration drive to the basket. Fr Matthews were forced into fouling to stop the clock but Portlaoise soon found themselves on the line with team fouls resulting in two shots per foul committed.

One from two was enough to keep Panthers lead ticking over and they saw out the victory on a scoreline of 57-38 to set up a meeting with Tralee Imperials in under two weeks time. The final is sure to be a brilliant and close game with Portlaoises only loss this year against Tralee away.

Reaching the National Finals is an amazing achievement for each players and the club as a whole and the team needs everybodys support in the Arena. Keep updated with all the news and fixtures in next weeks edition.