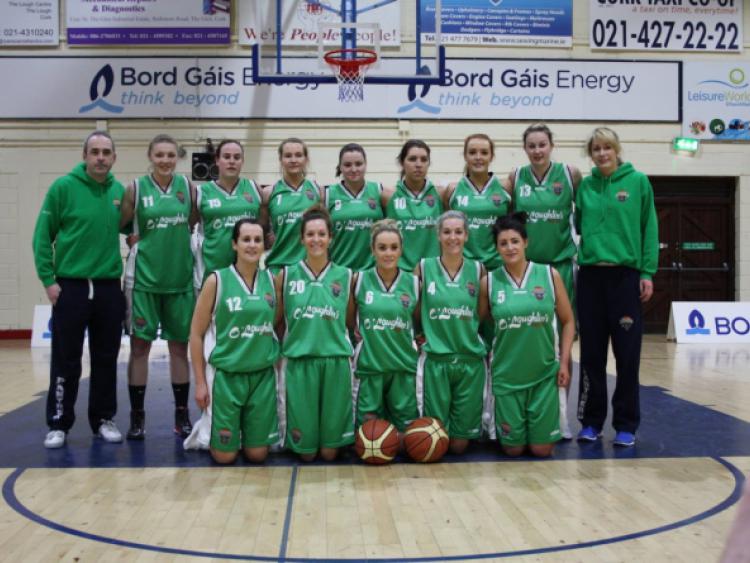 Tralee Imperials avenged their National Cup final defeat on Saturday night when they took the final piece of silverware of the year after an outstanding display of defence to take the title by twenty points.

Tralee Imperials avenged their National Cup final defeat on Saturday night when they took the final piece of silverware of the year after an outstanding display of defence to take the title by twenty points.

O’Loughlins Panthers were outplayed on the night with Tralee making sure they took something out of the season. The Panthers ladies will definitely look at their season as a whole after last weekend and not dwell on this League final loss for long.

This years achievements of winning both the National Cup and the regular season titles are above all the clubs expectations and will live long in the memory of everyone involved.

Tralee Imperials got off to the perfect start and were quick to set the pace of the game to suit their play. Portlaoise set up in their usual zone defence but they started slowly as Emma Sherwood picked up two quick baskets to settle her side.

Portlaoise responded with two shots from Catherine O’Sullivan but Tralee were winning the main battles the other end of the floor as they continued to pick off easy scores while taking offensive rebounds. Quick ball movement around the key by Imperials created opportunities on the weak side for Cassandra Buckley to score eight early points, sinking two three pointers and a backdoor lay-up.

Portlaoise were struggling to add to their tally and could only manage another four points in the quarter while Tralee continued to bombard the Panthers defence both inside and outside the key with last years Player of the Year Sinead Mackessy and Lynn Jones giving Imperials a big fifteen point first quarter lead on a scoreline of 23-8.

The second quarter saw a change in tactics for Portlaoise as they took a chance in defence by switching to man-to-man. The intensity was much higher and Tralee found it extremely difficult to break down the tight defence.

These sides know so much about each other at this stage and this game was always going to be low scoring affair. O’Loughlins Panthers held Tralee to just four points from Sherwood and Finnegan but could only manage to cut five points off Imperials lead.

Both defences remained on top with every basket as valuable as the next. Panthers scores in the quarter came from a three pointer from Catherine O’Sullivan with the other six from Sinead Nihill and Nicola Farrell. The half time score was 27-17 in favour of the defending League Cup champions Tralee.

The third quarter saw the emergence of Tralee’s big three as Sherwood, Mackessy and Jones combined for their sides total of fourteen points in the ten minute period. Mackessy depended greatly on good ball being passed inside as Nicola Farrell and Tracey Fallon continued to keep her at bay.

Her accuracy from the free throw line brought her personal tally to thirteen points leading all scorers. O’Loughlins Panthers kept plugging away at the Imperials lead and two great baskets from Tracey Fallon following penetrating moves kept the deficit under double digits.

Portlaoise continued to rally with Sinead Melia adding two baskets in succession. Lynn Jones then hit a massive three pointer before a dubious call on the Imperials defensive end on Sinead Nihill was followed by a technical foul on Panthers coach Peter O’Sullivan which sent Mackessy to the line making three from four and extended their lead back out to eleven at the end of the quarter.

With the game still there for the taking, it would take nothing but a perfect start from Portlaoise to take the title as scores were hard to come by. The gap was all too much as Imperials continued to close out hard on Panthers offensive play and shots and lay-ups began to dry up for Portlaoise.

Tralee began to dominate just at the right time as they broke out on transition with the games MVP Emma Sherwood putting the game beyond reach with three late baskets to leave her as top scorer on sixteen points, proving to be the difference between the sides.

Portlaoise continued to try break down the Imperials defence but Tralee coach Liam Culloty had his homework done since the National Cup final as his side managed to shut out O’Sullivan sister Maeve and Catherine and Sinead Melia for long periods of the game.

They held Portlaoise to just three fourth quarter points in what was the Panthers sides lowest total scored this year by a mile. Tralee pushed their lead out to twenty points by the final buzzer and fully deserved their victory as they dominated for large parts of the game.

It’s far from the finish to the year that O’Loughlins Panthers hoped for but the realisation that they competed at the latter stages of all competitions this season was evident at the end of the game.

Taking two out of three titles is an achievement that will be very hard to match again but the squad will look to build on their successes this year and bring them into the following season.