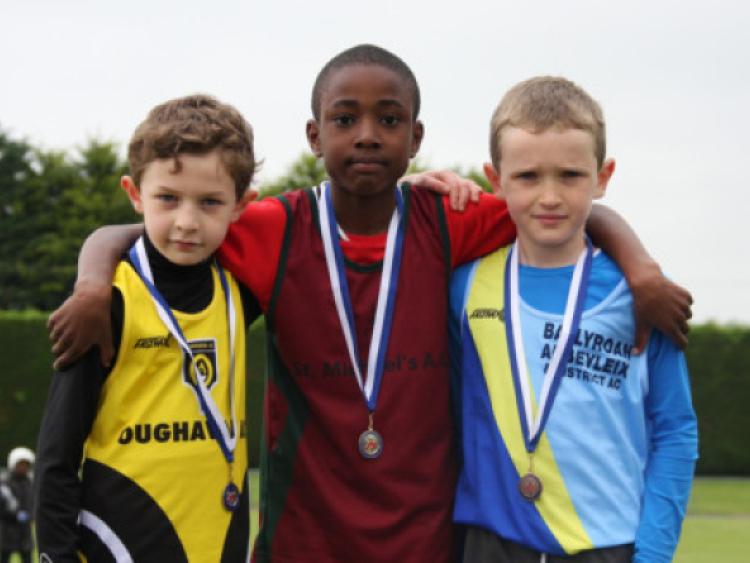 The Laois County Track and Field took place on Sunday May 25th in Tullamore Harriers.

The Laois County Track and Field took place on Sunday May 25th in Tullamore Harriers.

A good crowd made the short trip across the border to Offaly for what turned out to be a lovely fresh day. There were 64 events on offer, 42 on the track and 22 on the field which included the javelin and 56lbs weight for distance which was won by Seamus Fitzpatrick (Portlaoise AC).

The events started bang on time, with John Scully who did an excellent job as MC introducing the U-15 girls hurdles, which was a competitive race won by Gillian Keenan of Emo Rath AC just ahead of Ruby Millet (St Abban’s).

Once the hurdles were finished, they were quickly cleared and the Sprints started. All sprints on the day were 200m apart from the scheduled 400m senior mens and ladies. First out of the blocks were the U-10 girls which was won by Cara Goode of Ballyfin AC.

This was her third gold medal in county sprint events this year. John Ikpotokin (St Michael’s AC) followed suit by claiming gold in the boys U-10, followed by Blake Kemmy (Oughaval AC) and Sean Brennan (Ballyroan Abbeyleix and District AC).

St Michaels got the top three places in the U-12 Girls, Helen Ikpotokin was a clear winner followed by Heater Murphy and Ella-Cydny Banjoko-Johnson. Gillian Keenan got a second gold in the U-16 sprints ahead of the Portlaoise sisters Aoife and Elaine Daly. Jamie Pender of St Abbans Ac won the Boys U-18 ahead of Adam Coss (Mountmellick AC) and Fergal Scully(Oughaval AC)who had both medalled earlier in the hurdles.

The distance races were also hotly contested with a wide spread of winners from each club. Heather Murphy came in ahead of Lucy Goode (Ballyfin AC) in the U-11 600m. John Ikpotokin and Paul Roberts of St Michaels AC came in ahead of Blake Kemmy in the boys U-11 600m.

Rosenallis-Kilcavan were also on the podium with Cathal Grennan continuing his super form in the boys U-17 1200m. The senior races were won in impressive style by St Michael’s John Fenlon and Pippa Hackett.

With all points going towards the JK Malone Trophy which is a team competition with points going to the top four in each event. The standings after the track events had St Michael’s AC first with 54 points followed by St Abban’s and Portlaoise both on 53 points.

With points being so close the field events were always going to decide the winner on the day. Portlaoise and St Abban’s pushed ahead with good wins in the Javelin for Shane Buggy, TJ Burke and Tom Buggy of St Abbans and Aoife Daly of Portlaoise also claiming gold.

At the end of what was a great day of sport St Abbans AC had won the JK Malone Trophy scoring 122points followed by Portlaoise AC on 96 points and then St Michaels AC.

The date for Day 3 of the Track and Field will be confirmed shortly. As usual all results can be found on the Laois Athletics Facebook page. Congratulations to St Abbans on winning the JK Malone and well done to all the athletes who performed admirably on the day.