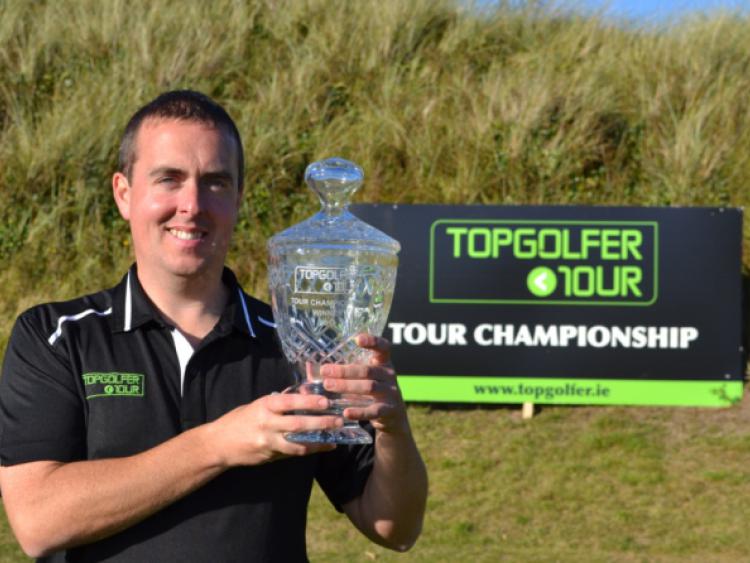 Mountrath GC golfer Gareth Keogh was crowned the ‘Topgolfer’ champion at Portmarnock links recently, after he came out on top of a nationwide competition for amateur golfers.

Mountrath GC golfer Gareth Keogh was crowned the ‘Topgolfer’ champion at Portmarnock links recently, after he came out on top of a nationwide competition for amateur golfers.

Keogh, a six handicap left-hander, posted a net score of 147 over two rounds at the famous Dublin links course to win by two shots.

The ‘Topgolfer’ tour is a competition run across Ireland for amateur golfers with a handicap of 9 or less. They are run in conjunction with a club’s Scratch Cup. Over 3,500 players from across Ireland competed this year.

In total, there were 35 events held throughout the country, and golfers who joined the ‘Topgolfer’ tour could play in as many of them as they liked. Anyone who won a competition gained entry for the Tour Championship, while an Order of Merit was also in operation.

Keogh came fifth in the Order of Merit, having played in 17 events over the last five months. The qualified him for the playoff in New Forest, and he came through that test to book his place in the final.

An opening round of 70 (nett) in Portmarnock saw him lead going into the final day, meaning he played in the last group out on Sunday. He didn’t replicate his score in round one, but a closing 77 (nett) was good enough to see him hold on and claim the title.

Speaking last week, Keogh admitted it was “only starting to sink in” a few days after his victory, as he claimed a prize he had set out to win at the start of the year.

“I played in around ten or twelve events last year, and I finished up missing out on qualifying through the Order of Merit by one place. I wanted to play in as many as I could this year and get to the playoff. You get points for taking part, and bonus points for finishing in the top twenty, and I came second in one and had a few top tens and top twenties as well.”

While it was a year to remember for Keogh, the same could be said for the tour itself, as it continues to go from strength to strength. “I was talking to one of the organisers and he told me this was the most successful year have had so far, they had around 3,500 golfers taking part between 35 scratch cups all over Ireland.”

An accountant by trade, Gareth only took up golfing ten years ago as he came to an end of his college studies, but has made steady progress since then. His victory here also qualifies him directly for the finals next year.

And, not only does he get the title of ‘Topgolfer’, and an impressive crystal trophy to go with it, but he has also gained entry to the Oitavos Open in Portugal next February. The competition is played on the Oitavos Dunes course near Lisbon, which is ranked in the top 100 courses in the world by Golf magazine.