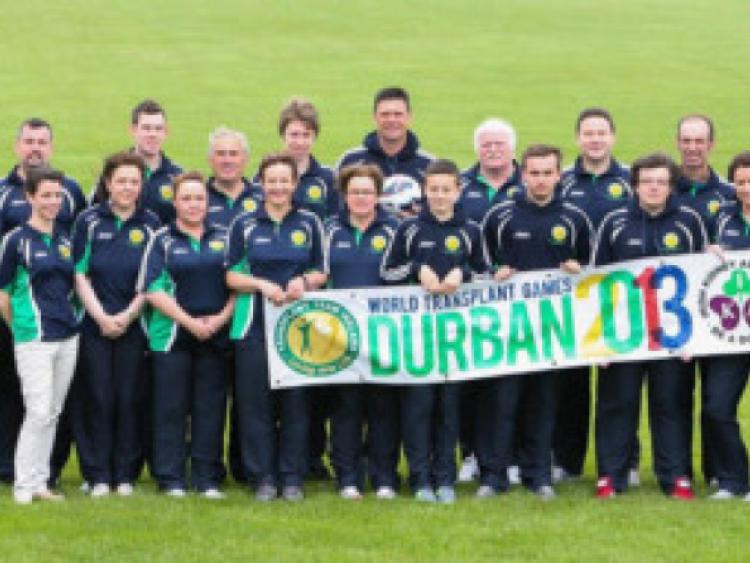 Laois athlete Robbie Lyons has added to his already impressive haul of medals in international events by bringing home a bronze medal from the World Transplant Games in Durban.

Laois athlete Robbie Lyons has added to his already impressive haul of medals in international events by bringing home a bronze medal from the World Transplant Games in Durban.

Nineteen year old Robbie from The Swan was competing in the 18- 29 years of age category.

He jumped a distance of 5.28 metres to secure the bronze medal.

At the previous World Transplant Games in Sweden two years ago, Robbie broke the world record for his distance in the Long Jump event in the younger U-18’s age category securing a gold medal.

Robbie also made I through to the final of the 100 metres winning his heat in a time of 12.42 seconds and he performed strongly to finish fifth in the final in a similar time of 12.44 seconds.

In what was a very busy few days for the young Laois athlete, he qualified for the final of the 200 metres finishing second in his heat in a time of 25.91 seconds.

He ran faster again in the final coming home in fifth place just 0.5 seconds outside the medals in an impressive time of 25.74. He was also part of both the Irish 4x100m and 4x400m relay teams with the 4x400m team finishing sixth overall.

After his success at the event, Robbie said, “I am delighted with the way things have turned out. It reminds me that the reason I’m here is my donor and the decision the donor family made.”

Robbie had his kidney transplant in in September 2009, at the age of just 15. Since then however he has been a shining example for those who had transplants starring on the international athletics stage.

In the World Transplant Games in Gothenburg in 2011 he came home with one gold and two silver medals. In 2012 at the European Transplant and Dialysis Games in Croatia he pocketed four silvers and a bronze.

Robbie, who sat his Leaving Certificate Exams earlier this summer, hopes to secure a sports scholarship at the University of Limerick.

The team arrived home on Monday afternoon to a rapturous welcome from family and friends in Dublin Airport.

However Robbie Lyons had another engagement to fulfil as he appeared on Ireland AM on TV3 on Tuesday morning along with gold medalist Sheila Gregan.

Over 1000 athletes from 50 countries participated in the 19th World Transplant Games which are a celebration of life and the strength and generosity of human spirit. The Games include a broad range of events including Track & Field, road races, cycling, swimming, golf, tennis, table-tennis, badminton, squash, lawn bowls, petanque and Tenpin Bowling.

The Irish Kidney Association is responsible for managing Transplant Team Ireland’s participation at the Games. Individual athletes have undertaken fundraising activities to offset some of the expenses incurred in travelling to and participating in the Games.

Their achievements offer inspiration to others experiencing organ failure and an impetus to the general public to embrace organ donation.”

For organ donor cards Freetext DONOR to 50050 or contact the Irish Kidney Association on lo-call 1890 543639 or log on to www.ika.ie . You can now store your donor card details on your smart phone by downloading the free Organ Donor Ecard app.