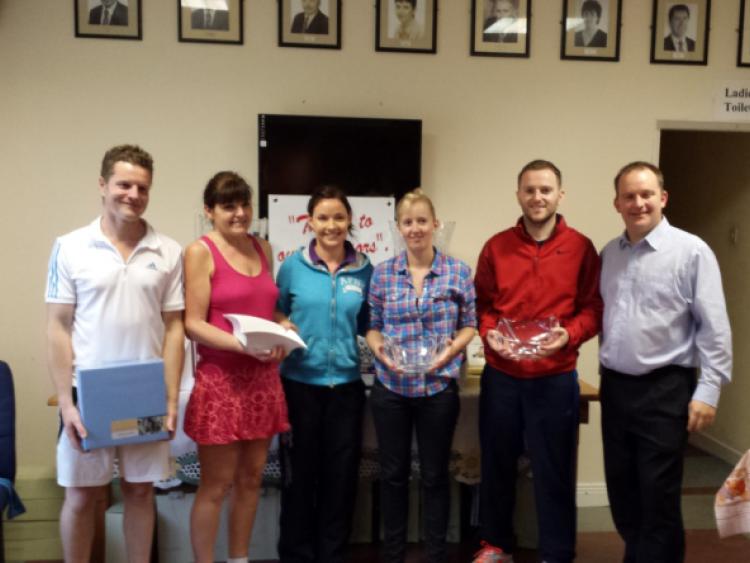 The Gathering Open Week took place in Abbeyleix Tennis Club from September 29 to October 6 and saw over 80 competitors from seven clubs battle it out in seven different competitions.

The Gathering Open Week took place in Abbeyleix Tennis Club from September 29 to October 6 and saw over 80 competitors from seven clubs battle it out in seven different competitions.

This event was kindly sponsored by Clelands supermarket, Abbeyleix and was a very enjoyable week for all. All finals took place on October 6 in what was a great day of tennis and a great success for the club.

It was great to see two outside clubs in the final of the C ladies doubles and in the end it was Sorcha Murphy and Catherine Tuohy who got the better of Michelle Byrne and Maura O’ Loughlin.

In the B ladies doubles, an all Abbeyleix final took place with Siobhan Kirk and Deirdre Fingleton getting the better of Gillian Rea and Gemma Ogilvie in two sets.

The B mixed final was a lengthy battle between an Abbeyleix and a Rathangan pair. In the end it was Tim Mounsey and Siobhan Kirk who came out on top after three sets against John Goff and Mary McCrann.

John Goff and Tom Gallagher of Rathangan saw off the Abbeyleix pairing of John Moran and Terry Carroll in the B mens doubles.

In another all Abbeyleix final, Leisa Fitzgerald and Fiona Bonham came back to win the A ladies doubles after losing the first set to Mary Daly and Tracy Burke.

David Brophy and Fiona Bonham got the better of Leisa Fitzgerald and Simon White to win the A mixed doubles.

The match of the evening was the A mens doubles which came down to a tie break in the third set. With both pairings from Abbeyleix, the match made great viewing for spectators and some great tennis was played. Simon White and Ciaran Walsh were victorious on the day against Cian Prendergast and David Brophy.

Many thanks to to all who supported our Table Quiz which was held recently and special thanks to the Manor Hotel and the three local businesses, Shiels Butchers, Super Valu and Treasures Giftware Portlaoise for sponsoring the prizes on the night.