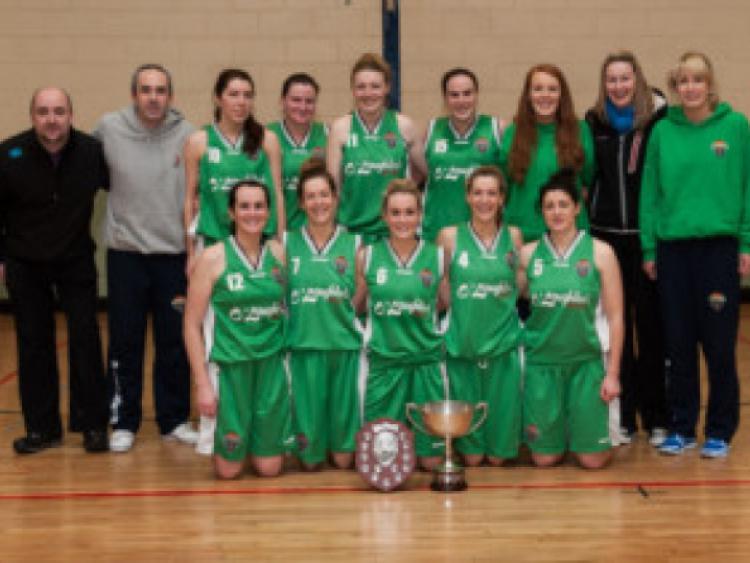 O’Loughlins Panthers ladies National League team played host to Oblate Dynamos on Saturday night in the semi-final of the National League Cup, after earning the home draw by becoming the regular season champions the previous week.

O’Loughlins Panthers ladies National League team played host to Oblate Dynamos on Saturday night in the semi-final of the National League Cup, after earning the home draw by becoming the regular season champions the previous week.

This pitted them against a Dynamos side who finished fourth in the league but were one of two teams that had a victory to their name over Portlaoise during the league season. A massive performance was needed to overcome this Dublin outfit and that’s exactly what they produced as they defended like their lives depended on it to take their place in the final following an impressive seventeen point victory.

This is just another step in what has been an unbelievable season with O’Loughlins Panthers now in with a chance of doing the treble and taking all available titles in only their second year at this level.

In front of the biggest crowd of the year it was the away support that were first out of their seats as Georgina McKenna scored the opening basket of the game. The home support were quickly behind their side as the Panthers ladies found early momentum and with Nicola Farrell scoring inside the key and space becoming available off the screen.

The Portlaoise guards quickly upped the intensity of the game and Dynamos began to struggle to keep up. Oblates were missing shots from distance as Portlaoise closed out the inside threat in their tight zone defence and this created the opportunity to break with Sinead Melia and Tracey Fallon running the floor and finishing their lay-ups to keep their side out in front.

With Catherine O’Sullivan getting the better of her marker early on she added a quick five points to give Portlaoise an early advantage. There was no let up in the Panthers attack as they continued to show their nerve as they switched their point of attack to inside with Sinead Nihill coming off the bench to score two great baskets under the boards.

Portlaoise were motoring in offence and after the first ten minutes had already scored a highly impressive thirty point tally while a buzzer three from Crowley put thirteen points between the sides.

The second quarter started at a cracking pace with both teams looking to run the ball at every opportunity. Maeve O’Sullivan was using her pace to great use as she penetrated past her defender to score the first basket of the quarter. Nihill was next on the scoresheet as she continued to cause problems for the visitors inside the key.

With shots beginning to drop for Dynamos, Panthers changed up their defence and began to pressure in man-to-man. With both teams now playing the same defence it meant that scores were becoming harder to work for. Both teams traded three pointers with Sinead Melia on target for Portlaoise while Georgina McKenna hit the target for Dynamos.

Two free throws from Melia and another two baskets from Catherine O’Sullivan kept O’Loughlins Panthers out in front and playing some great basketball along the way. A Maeve O’Sullivan basket on the break concluded the first half and gave her side a sixteen point lead at the break on a scoreline of 45-29.

Portlaoise knew the game was far from over despite their great first half performance as their home league fixture took the same route and the home side only took a one point win on the occasion. Oblates were first on the board in the third with Mc Mahon posting low and turned to the basket for a good score.

Panthers responded once more with great penetrating play from the O’Sullivan sisters while Sinead Melia was becoming more confident on the other wing. Melia’s pace is exceptional and she began to use this to great affect taking on her opponent and scoring with a floater.

With pressure being asserted on the Portlaoise guards it was up to the post players to step up and straight away Tracey Fallon and Sinead Nihill combined for two excellent baskets inside to keep their sides half time lead intact. Two big three pointers from Sarah Behan and a fast break basket by Teresa Harrisson tied up the quarter and still left Oblate a mountain to climb going into the last.

O’Loughlins Panthers coach Peter O’Sullivan knew that another big quarter was required to secure the victory and brought back in his first five to see the game out. But things didn’t go to plan in the first two minutes of the fourth quarter as Harrisson was again running coast to coast scoring another two lay-ups to cut the gap.

Two further baskets by their other post players Heather Meagher brought the deficit below ten for the first time since the first quarter. But Portlaoise have experienced tight games right throughout the season and have come out the right side of most. Sinead Melia was again on hand to take the game to Oblate and went two for two from the line to put the lead back out to ten.

This spurred on her teammates and the home crowd and Portlaoise pushed out the lead again with baskets from Tracey Fallon, Maeve O’Sullivan and Sinead Melia. Nicola Farrell was getting the better of the opposition under the boards on the defensive end which was key to Portlaoise’s victory.

Four free throws from Tracey Fallon and Nicola Farrell put the game beyond Oblates and booked their spot in the end of season finals weekend down in Neptune stadium. This has been a memorable season to date for O’Loughlins Panthers Portlaoise and they are now forty minutes away from creating more history in the short life of the ever-expanding club.