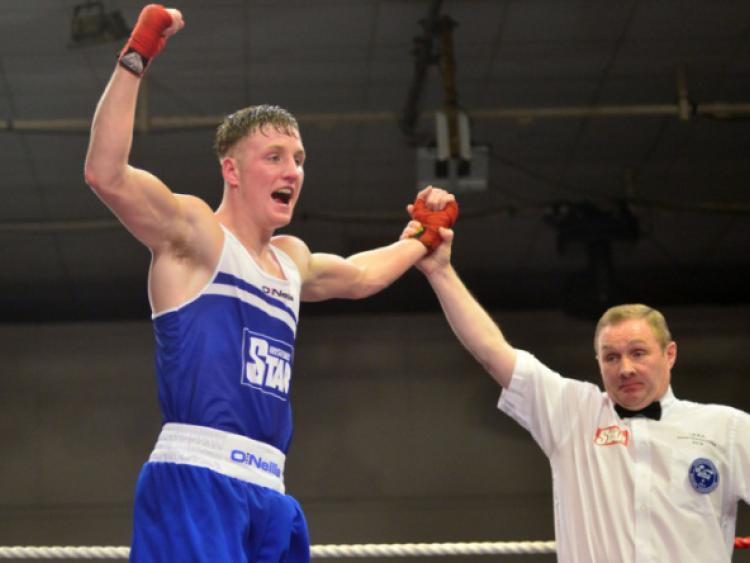 Michael O’Reilly made history last Friday night as he became the first Portlaoise boxer to win a national title in over 70 years.

Michael O’Reilly made history last Friday night as he became the first Portlaoise boxer to win a national title in over 70 years.

O’Reilly, fighting in the middleweight division, overcame former Olympian Darren O’Neill on a split to decision. In doing so, he becomes the first Portlaoise man since Joe Kerry in 1943 to bring a national title back to the county.

Speaking after the success, his coach Pat Ryan admitted that O’Reilly’s fast start had won him the title. “Darren O’Neill came back at him, but in truth Michael had an absolutely blistering first two rounds, the pace he went at was phenomenal.

“He put such distance between them that the last round was just about keeping it tight, we knew we just had to get to the end of the round. O’Neill hit a purple patch, but you’re always going to get that from a former Olympian.

“Michael is an incredible talent, and this is the result of all the work done over the last ten years.”

This victory is the latest in O’Reilly’s development, having previously won national youth, intermediate and U-21 titles, as well as European gold and silver medals.

There was no time to enjoy the success either, as he was back in the gym on Saturday morning for a recovery session, before then doing a sparring session with a Spanish fighter who is over in Portlaoise for a training camp.

Ryan has also confirmed that O’Reilly’s win has earned him a place on the National High-Performance squad. From there, he hopes to be entered into a number of multi-nation tournaments that could help him to secure funding.

While O’Reilly’s success is significant for him, it is also a huge bonus for Portlaoise Boxing Club, who moved into a new high-performance training centre in Kea-Lew business park on February 4.

O’Reilly wasn’t the only member of Portlaoise BC in action last Friday either, as Michael Nevin also stepped through the ropes in the 64kg class.

It wasn’t to be on this occasion for Nevin, although Ryan predicts big thigns from him in the future. “Michael moved up to the 64kg bracket this year, and that move will really benefit him next year.”

Elsewhere in the club, Jimmy O’Reilly and Michael Nevin Junior won Leinster titles in Athy over the weekend, with Mikey Nevin and Hughie Nevin losing out on split decisions.

Ryan thanked all the coaches in the club for their efforts.