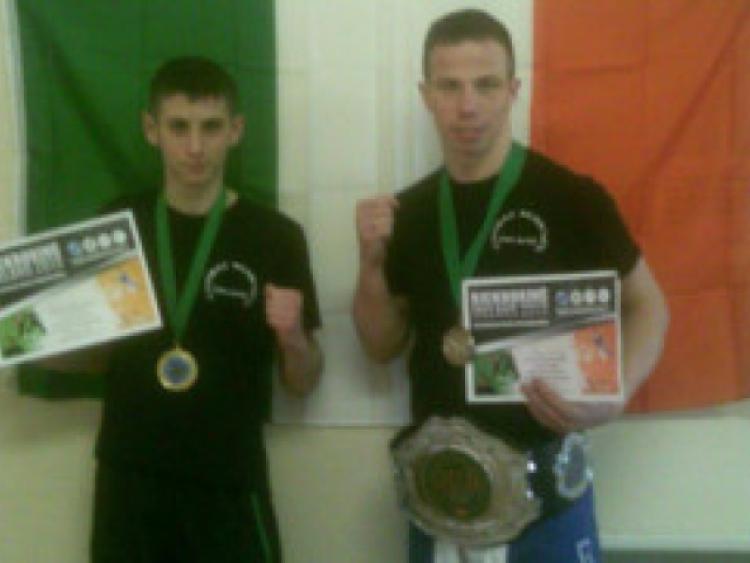 Combat Kickboxing Laois was established in 2009 by local kickboxer Tommy Delaney. His club has gone from strength-to-strength each year in achieving both Irish and world rankings in kickboxing.

Combat Kickboxing Laois was established in 2009 by local kickboxer Tommy Delaney. His club has gone from strength-to-strength each year in achieving both Irish and world rankings in kickboxing.

This year has been very busy and successful for the club as well. Tommy, who coaches Combat Kickboxing Laois, successfully won the 63.5kg full-contact Irish national title for 2013 by defeating current European Champion Eric Daly from Galway. This was a very hard and close fight tommy said, winning by just one point in the end.

This qualified Tommy to travel with the Irish kickboxing team to represent his country in the the World Kickboxing Championships in Turkey in November later this year. He’s also travelling in a couple of weeks time with the Irish team to fight in Norway, which all is valuable expierence to both him and the club’s fighters, and they will all reap the benefits.

Tommy says kickboxing is a very popular sport and is still growing, and he is happy to give anyone the oppertunity he is currently getting himself. “Anyone has the abilty to get to where I am, you just got to believe in yourself as I did” says the club coach.

Tommy also passed on his congratulations to one of the club’s junior fighters, Jack Wiseley, who is an outstanding kickboxer and a great role model for any child who wants to start kickboxing. Jack has been training with Tommy for three years now and has been very successfull.

He fought in the Junior Irish Light Contact Nationals on Sunday last and successfully won his fight, making him Irish champion for 2013. This qualified Jack to travel with the Junior Irish Kickboxing team to fight in the European Junior Kickboxing Championships in Poland in September of this year. This is Jack’s second year to be on the Irish team, and he travelled to the World Championships in Slovakia last year and brought home a bronze medal. That was a great achievement for him and Tommy fully believe’s he has the ability to bring home a European title this year.

The Combat Kickboxing club is based in Mountmellick and Portlaoise. Tommy Delaney teaches kickboxing to both boys and girls, men and women in junior and senior events. He does admit, however, that fighting is not for everyone and is not something he would ever force on someone or ask anyone to do.

That is one’s own choice if interested, and Tommy as an experienced kickboxing coach will make the best of your ability and get you the opportunities you deserve. As he is also an expierenced and qualified personal trainer, he has a massive interest in  fitness and total body conditioning for the ordinary person.

Kickboxing is great for these two components and anyone can achieve their goals once they understand their own ability. Tommy would encourage anyone of any fitness level or age to give it a go. New members are always welcome to join the club, just contact Tommy at 086-8496205 for any information on classes or check us out on facebook by searching Combat Kickboxing Laois.

Tommy went on to say that he would like to give a big thanks to anyone who supports him on a daily basis, which has helped him to balance a busy training schedule, and without the support he would not be able achieve his goals. He also thanked his sponses who have helped him to travel abroad and represent Ireland.*